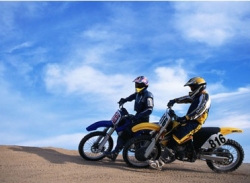 January 11, 2011 (Ocotillo) -- The American Motorcycle Association (AMA)' District 38 off-road motorcycle racing season kicks off January 30th with the fifth annual OTB Jeff Cady memorial race. The race was established to commemorate the loss of a fellow racer and friend Jeff Cady. It will be a desert scramble format and consist of approximately four 25-mile loops. Race sign-ups, pit row, and the race starting line will be located southeast of the Superstition Mountain range off Huff Road.

This year's race season consists of 13 weekends which includes the March 6th national race promoted by The Road Runner off- road club.

The national starting/staging area will be in the Superstition Recreation area off Wheeler road in Ocotillo. The national race has included high profile racing names such as Destry Abbott, David Pearson, David Kamo, and last year's winner, Norman Kendall.

District 38 encompasses San Diego and Imperial Counties. The history of District 38 off- road racing dates back at least into the early 1970s. It became very popular in the late ‘80s and ‘90s as Lee (Otis "Fud" Fudpucker) Sieck promoted the race series up until his death in 2003. The current evolution of D38 started racing again in the local deserts in 2005 and has been growing as a popular family-based sport ever since.

For more information, check the District 38 off-road site at http://amad38.com.