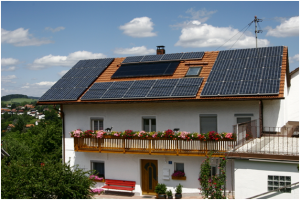 July 15, 2012 (San Diego’s East County) –What if you didn’t have to buy power from SDG&E, but could purchase electricity from a local energy cooperative instead?

Suppose the power was generated all from renewable energy--no oil, gas or nuclear?  Better yet, all of that renewable power would come from urban sources such as rooftop and parking lot solar--and you could get incentives to put solar on your home or business.

Now envision this "green" advantage as a member of the co-op--you could earn credits by selling your excess solar power.

This scenario is moving closer to becoming a reality.

Last month, the nonprofit San Diego Energy District Foundation (SDEDF) announced plans to form a local energy cooperative which would give homeowners and business owners  real choice between utility-scale energy projects and clean, green locally-generated power.  SDEDF is exploring options for local energy cooperatives with the County of San Diego, as well as the cities of Santee and Solana Beach.

“The local energy cooperative will not include industrial-scale wind projects and large-scale solar in desert solar projects as long as I am associated with it,” assures engineer Bill Powers, co-founder of SDEDF, along with Lane Sharman. “The objective is to maximize use of local urban/suburban solar on rooftops and parking lots while keeping the rate competitive with the SDG&E rate.”

The cooperative is made possible by a state law that allows formation of cooperatives to provide power through community choice aggregation (CCA).  The cooperative will be able to transmit renewable energy to consumers over existing public utility power lines, also administering energy efficient and conservation programs.

The law was passed back in 2002, but so far only Marin County has moved forward to form an operational CCA.  But that should soon change—thanks to a huge drop in the price of solar energy.

Back in 2005, a study for San Diego County showed that San Diego could save energy costs significantly and increase renewable energy 40%, also stabilizing energy rates  if a CCA could be implemented.  AT the time, the idea was shelved because of a risk that CCA members might pay slightly more for their electricity in the first few years of operation.

But now in 2012, solar renewable costs have dropped to half of what they were, making it economically attractive to invest in a CCA.

In  addition, Marin Clean Energy is now building its own urban solar projects, including one at the San Rafael Airport.

The cooperative also offers a net energy metering program that enables customers to get a premium credit for excess power that they produce, as well as a feed-in tariff similar to Germany’s which allows people to develop their own renewable energy projects at guaranteed premium rates.

Founders of the SDEDF believe that San Diegans will enjoy many benefits from a cooperative energy option, including clean energy, reduction of air pollution emissions, and creation of good-paying local jobs.  The going rate for solar energy installers is running $20 to $40 an hour locally--and the jobs created would be permanent, not short-term construction gigs that most other energy projects offer.

Many San Diegans, particularly East County residents, would no doubt welcome an alternative to SDG&E.  Many victims of the 2007 wildfires caused by SDG&E’s power lines have still not been compensated for their lost homes.  Controversies over environmental destruction from SDG&E’s Sunrise Powerlink and the ravaging impacts of industrial-scale wind and desert solar projects that SDG&E seeks to hook up to Powerlink have further alienated many East County residents.

Increasingly, San Diego consumers are installing rooftop solar to escape paying SDG&E for utility bills. But recently, SDG&E tried to persuade the California Public Utilities Commission to impose massive taxes on solar energy producers through its proposed Network Use Charge.  In January, the California Public Utility Commission rejected that effort as illegal, however SDG&E is now seeking to change state law to legalize the effort to gouge solar power producers, according to SDEDF.

SDEDF’s website states , “The future with SDG&E is not promising. As a regulated monopoly with strong lobbying muscle, it will continue to do everything possible to sell energy on its sterms which serve to fund its bureaucracy, its parent, Sempra Energy and their shareholders.”

SDEDF is the brainchild of Lane Sharman ( a senior executive with experience in power project development, regulatory affairs and government relations) and Bill  Powers, a respected engineer specializing in utility and energy resource management who has previously shaped strategy to achieve renewable objectives for large public and investor-owned utilities.  The nonprofit SDEDF  was started with support from the nonprofit San Diego Foundation.

In June, the group held a Government Conference on Community Choice Aggregation to educate local officials on their plan’s potential.  SDEDF has identified “heroes” among public officials in both political parties who have embraced  the goals of clean, renewable energy and alternatives to SDG&E.  These include Supervisor Dianne Jacob and Supervisorial candidate Dave Roberts, as well as San Diego Mayoral candidate Bob Filner.

SDG&E has publicly stated that it will cooperate with formation of a local energy cooperative.

Next up, SDEDF is seeking  ambassadors to help educate officials, local stakeholders, community leaders, and members of the community and benefits of local control over electrical energy supplies.  The group recently hosted a “Power to the People” party and aspires to host more around the region.

“The concept is so basic,” SDEDF’s website concludes. “San Diegans all deserve choice which creates competition which in turn creates a great customer experience.”