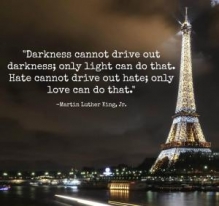 On the drive home to San Diego from an event in Los Angeles, USA Today best-selling author Jennifer Coburn and Adventure by the Book owner Susan E. McBeth came up with an idea to throw a fundraiser benefiting the French Red Cross. The two women had recently taken trips to Paris and wanted to do something to help the victims of the November 13 attacks.

By the time they arrived home, they already had four authors of Paris-themed books on board, according to Coburn. Eight days later on November 22, the Je Suis Paris fundraiser was realized and proceeds exceeded the initial goal of $5,000.

“It was a really great night,” said Coburn, who had returned from a trip to Paris only three weeks before. “We had a lot of support. Everybody just kind of jumped in.”

McBeth said they had no difficulty finding people to help. She recalled giving Coburn her cell phone on the drive to San Diego and telling her to call authors in her contact list who had a connection to Paris. Coburn first called author Amy Finley, who secured a donated venue at The Cheese Store.

One hundred and thirty people attended the fundraiser. “We had no idea what to expect. I mean we only had eight days,” said McBeth. “We were really, really pleased with the turnout.”

Among the attendees were seven Southern Californian authors who donated their books and time for the fundraiser, including Mary Duncan who lives primarily in Paris and had been there during the attacks, according to McBeth. Duncan flew into San Diego two nights before the event. She also has a home in La Jolla.

McBeth and Coburn held a silent auction for donated items that included 15 gift baskets, dinner at best-selling author Susan Vreeland's home, and a one-week stay at a house in Provence, France. The gift baskets included autographed books by authors such as Michelle Gable, Juliette Sobanet, Jan Moran, and Susan Meissner, as well as other goodies like massage vouchers and museum passes.

“People were absolutely wonderful and generous,” Coburn said. “Some people gave us $20, some people gave us a couple hundred dollars.” She also said that everyone who had been asked to help did, often giving more than was requested.

When news broke of the November 13 events Coburn said friends expressed relief that she had already left Paris, but initially she wished she had been there to offer aid. However, she later realized that since she does not speak French nor does she possess medical training she was able to do more good by organizing the fundraiser.

McBeth had been in Paris two months ago for a book tour she had arranged for Vreeland and seventeen fans. It had been McBeth's second visit to Paris, but her first opportunity to spend a significant amount of time in the city. They also visited Provence.

“We felt helpless,” McBeth said, recalling her feelings when she heard of the attacks. After her time in France, she felt connected to the people and the culture, and wanted to help. She said attendees expressed similar thoughts, saying that they had also wanted to do something but didn't know what, so they were grateful for the opportunity provided by the fundraiser.

“It was so touching,” said McBeth. “Everybody went above and beyond.”

Those who stayed until the event's end participated in a candlelight vigil during which a French version of John Lennon's song “Imagine” played. “I think that's what people want when there's a tragedy,” said McBeth, “to come together.”

Donations are being accepted on the Adventures by the Book website until Friday, after which the organizers will announce the total amount raised.

Sárka-Jonae Miller is East County Magazine's Ask an Author columnist and the author of five romantic comedy novels. Her Between Boyfriends Collection is always free to Kindle Unlimited and Amazon Prime members, but everyone can get her latest novel Spin Control free through Black Friday. Join SJ on Facebook and Twitter.