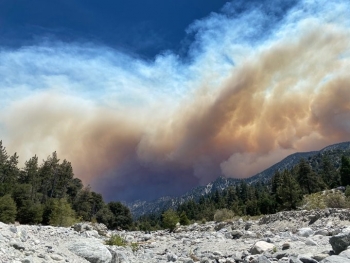 Update August 3, 2020:  San Bernadino National Forest reports this morning that the fire is now five percent contained, with acreage and evacuations remaining the same as yesterday.

August 1, 2020 (Riverside County) – San Miguel Firefighters are among crews battling the fast-moving #AppleFire, which has scorched over  12,000 acres in neighboring Riverside County, forcing evacuation of 4,800 people.  Tonight, Cal Fire confirms that at least one home and two outbuildings have been destroyed, with many structures threatened.

The wildland fire began in Cherry Valley on Oak Glen Road. In addition to threatening homes, the blaze is also burning in a portion of Cleveland National Forest. CNF announced that it has closed the San Gorgonio Wilderness and some trails, including Pacific Crest Trail between the forest boundary and Onyx Summit. The fire can be viewed from as far away as Big Bear. 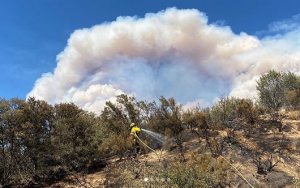 The fire is under unified command of the U.S. Forest Service, Riverside County Fire Department/Cal Fire.

San Miguel  Fire Department’s Engine 21 from East County has been dispatched as part of central zone strike team #6440A dispatched at 3:30 a.m. The local crew is assigned to the Apple Fire for a 24 hour shift, according to SMF’s Twitter feed, which included the photo, right. 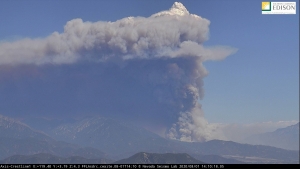 The Apple Fire is producing dramatic cloud formations known as pyrocumulus clouds, formed when a rising column of hot air encounters moisture and condenses, as this photo taken by a Southern California  Edison camera shows:  Pyrocumulus clouds are a result of fire creating its own weather conditions, and in some cases can even produce rain -- an event that could bring welcome relief for firefighters.

View a map of the areas under evacuation orders, which is searchable by addresses:  https://countyofriverside.maps.arcgis.com/apps/webappviewer/index.html?id=0b143f3dd73a4881839ca856a893f35d