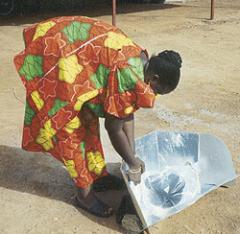 March 26, 2009 (San Diego)--Horrified to learn that women in Darfur were being attacked by soldiers when they would go out to gather wood for cooking, San Diego-based Voices of Women started raising funds to send solar-powered stoves to the women of Darfur.

"They can keep a pot boiling 24/7," VOW founder Jenni Prisk said of the Sudanese women now using three-sided aluminium solar cookers to feed their families. "It's preventing the rapes and killing. Simple as that."

This Sunday, March 29th, local VOW members and others will participate in the 2009 Walk for Darfur on Mission Bay. For information on how to sign up, visit www.voicesofwomen.org/events.html.

Prist started VOW after the 9/11 terrorist attacks in 2001. "I heard my Grandma's voice telling me, `You can either do something, or you can get mad." So she e-mailed all the women in her e-mail box and invited them to a meeting. Ninety showed up. Prisk urged women to work together to help other women here and around the planet. She believes that together, women can "blow the roof off the world and think as big as you can."

"It takes 17 people to rehabilitate a trafficked woman back into society," Prist said, citing counseling, housing, employment , psychiatric and legal services as among those needed by women who have been enslaved. "Domestic violence and sex trafficking are so prevelant in our society. It's terrifying."

VOW worked with Jewish World Watch to bring solar cookers to the women of Darfur. Locally, they have helped Sudanese refugees in San Diego. Local women have also helped raise money to provide prosthetic limbs for children bombing victims in both Israel and Palestine. They also supported an Afghan Women's Educational Center in Kabul.

"We have helped street children go back into school, boys and girls," Prisk said. "Some become human bombs because there is money and dignity for families. Often, their parents have been killed by the Taliban." Today, she said, "Afghan women are now getting a chance to speak up more and be heard."

Most recently, VOW is seeking to form partnerships with women in Africa to send groups of U.S. women to live with villagers and teach skills needed by young women. "The sad thing that happens to young women in Africa is when their parents are killed, they are boarded at school, but at age 14 they must get out." While boys learn skills needed to support themselves, girls are often victimized by pimps and sex traffickers. Teaching dressmaking, nursing, bookkeeping or business skills offers girls hope for a better future.

"These young girls are slipping through the cracks," Prist said. A native of New Zealand, Prisk cites a term from down under for successful women. "We call them tall poppies," said Prisk, whose efforts have fostered a movement to help women that has blossomed and grown around the world. For more information, visit www.voicesofwomen.org.