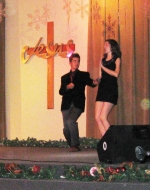 December 4, 2010 (Santee)--Santana High School students channeled their inner super models on Friday night for a charity fashion show at the New Heights Community Church in Santee. Using clothes from their own wardrobes, students from Santana high’s Invisible Children club took to the catwalk to raise money for the Invisible Children Foundation.

Founded by San Diego filmmakers Jason Russell, Laren Poole, and Bobby Bailey in 2003, Invisible Children is a non-profit organization aimed at stopping the abduction and forced involvement of children in the military in Uganda. 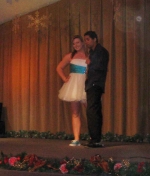 “We decided on doing a fashion show because by incorporating loud music and fashion we are able to connect to more people and inspire them to help the group,” says Invisible Children club co-president Nicole Munoz-Proulx.

From production to the models, the show was completely handled by the students who have heard the call to do something about the situation in Uganda.

“We are trying to raise money to build our school in Northern Uganda, called Sacred Heart Secondary. The money will help build the school, give them supp

As part of the “Schools for Schools” program, Santana High School and its students have taken a firm stance in trying to better the situation for the less fortunate children in Uganda. First created six years ago by film teacher Martin Johnson, the Invisible Children club has become one of the most popular clubs on campus as more and more students feel the need to participate.

“The message is emotional and powerful,” Munoz-Proulx concludes. “ It’s emotional to hear about students our age being taken advantage of; it’s a reality check to American students.”