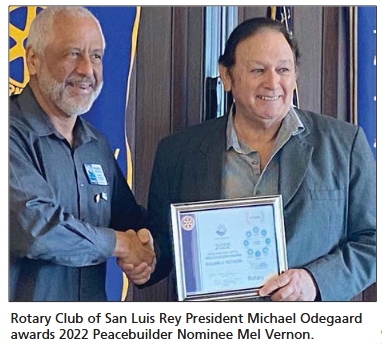 Reprinted with permission from Indian Voices

Rotary clubs are well known for leaders among the ranks of doctors and lawyers, but one San Diego County Rotary club may have just made history (again) in the recent installation of its first Indian chief: “Captain” of the San Luis Rey Band of Mission Indians, Melvin J. Vernon assumed the office of President of the Rotary Club of San Luis Rey (Oceanside) last July 1, accepting the gavel from Native Hawaiian Michael Odegaard who in 2019 qualified the Club as Rotary District 5340’s (San Diego & Imperial County) first “Peacebuilder Club” for teaching the principles of Positive Peacebuilding.

Whereas “negative peace” is simply the absence of violence, “positive peace” represents the cultivation of the values and institutions that create peaceful societies according to the Eight Pillars of Positive Peace proposed by Rotary International’s partner, the often quoted think-tank Institute for Economics & Peace (www.economicsandpeace.org) who annually publishes their peacefulness rankings both of nations and American states.

Since the Rotary Club of San Luis Rey in 2020 declared its goal of sponsoring a Luiseno oratorical festival by 2025 (and has dedicated each 3rd Tuesday meeting to Luiseno language instruction by Diania Cauldell) Oceanside Arts Commissioner Julia Fister, CEO of Studio ACE (www.studioace.org/valley-arts-festival) and Kumeyaay College’s director Dr. Stanley Rodriguez have joined the Club which meets at 8:00 am on 2nd, 3rd, and 4th, Tuesday mornings at the Pit Stop Diner at 3825 Mission Ave. Local community leaders interested in joining our efforts are invited to contact Club President Capt Vernon at melvern@aol.com.

The IDIL 2022-2032 Blue Ribbon Committee will work with the support of UNA-SD directors to promote the goals of the IDIL 2022-2032 Global Action Plan. In addition to Capt. Vernon and Dr. Rodriguez, members of the Committee currently in formation also include San Diego Cherokee Patrick Suggs who is Project Manager with the Naval Information Warfare Center Pacific (that provides the US Navy with research and development in cyber and space systems and capabilities across all war fighting domains), and internationally renown technology business consultant Dr. Ray Bender, author of “Culture.com, Building Corporate Culture in the Connected Workplace” published by John Wiley & Sons. Dr. Bender is a retired Army Colonel and a member of the Army’s Officer Candidate School Hall of Fame.

To educate American, California, and San Diego residents on IDIL 2022-2032, informational Facebook pages are now accessible to the public:

Surviving an 85 year ban, the State of Hawaiʻi in 1978 was the first US jurisdiction to make official its indigenous Hawaiian language, and through its 2014 Official Languages Act the State of Alaska made all 20 of the State’s indigenous language official along with English. The United Nations declared 2019 the "Year of Indigenous Languages" but later admitted that one year was an inadequate period to address the magnitude of the current threat to indigenous languages that requires coordinated legalization in order to stop the forces destroying them and their cultures in general.