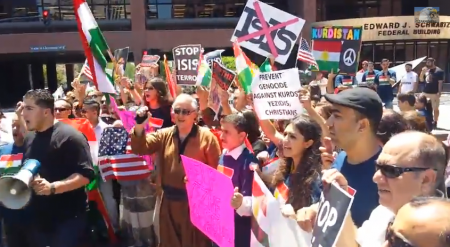 Hear our interview with  a local Kurdish-American woman whose family is caught up in the tragic actions unfolding in Kurdistan under the ISIS assault. Listen online now: (This interview originally aired on the East County Magazine Show on KNSJ  radio 89.1 FM)   https://www.eastcountymagazine.org/sites/eastcountymagazine.org/files/au...

August 15, 2014 (San Diego) – “This is a great humanitarian tragedy, and another genocide against the Kurdish nation,” Kurdish-American Amina (who asked that her last name be withheld) told East County Magazine.  She is horrified at news reports of beheadings, mass graves and the kidnapping of young girls as sex slaves by ISIS terrorists who have laid siege to the city of Shingal and trapped 100,000 refugees atop the Shingal Mountain. She is also frightened by what she is hearing from relatives in the region.

"No one feels safe there. People are hopeless,” she says.

“The Kurdish people know that their dear Peshmarga do not have weapons to defend them from these barbarians, and this makes them live and die in fear. We hear that the Kurdish government is asking people (one of them being my brother) to find themselves weapons and join the Peshmarga,” she wrote in an e-mail to East County Magazine. “Sadly, most people do not have weapons, so if they go to war, they will go with bare hands.” 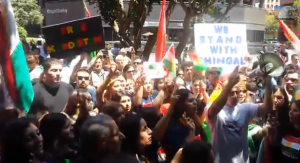 On August 11, hundreds  of  Kurdish-Americans held a rally in front of the federal building in downtown San Diego chanting “We love freedom” and “God bless USA” to show appreciation for President Barack Obama’s decision to launch airstrikes and humanitarian aid in their homeland.  Many held signs denouncing ISIS, the Al Qaeda splinter group that has declared an Islamic state or caliphate across Northern Iraq including the Kurdistan province. Other signs urged, "Free Kurdistan!"

The majority of those in this area are Yazidi Kurds, though there are also thousands of Kurdish Muslims.  The Yazidi religion dates back to ancient times, before Christianity.  Ordered to convert or die, they have been subject to atrocities, major news outlets report.

“I have heard that there are mass graves as high as 400 people, which includes children and those who were buried alive,” Amina says. “In the city, they killed or beheaded many men in front of their families and took their wives and daughters to be sold as sex slaves. I heard that they have sold 150 young girls and women today and that there are more who are going to market for sale tomorrow.” 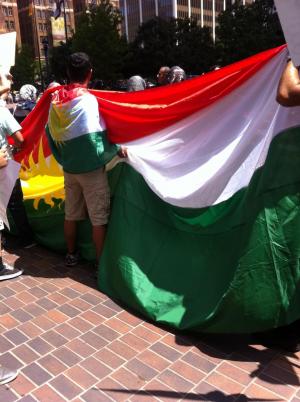 The U.S. has begun dropping humanitarian supplies to those trapped on the mountain who face slow death due to lack of food or water. Over 100 young children and elderly people have already lost their lives from hunger or thirst.

In addition, the U.S. has launched at least 17 airstrikes against ISIS forces, taking out artillery that ISIS used to shell the area.

U.S. bombings have helped to stop the advance of ISIS and enabled thousands of trapped Kurds to escape. But the air strikes have not done enough to help those trapped on Shingal Mountain, Amina believes.

“The U.S. can do much more,” she says.  Although Kurdish Syrian and Peshmarga forces managed to clear a narrow rout from the Kurdish region of Syria to Shingal Mountain after three days of effort, she reports, “this route is still not safe because ISIS can still shoot them from a distance” at rescuers trying to free those who are trapped.

Like many Kurdish-Americans, she wants the U.S. to provide arms directly to the Kurds, though official U.S. policy is to route arms through Iran.  But Iraq has not provided any weapons to the Kurds, says Amina.

“Kurdish Pesehmarga forces are capable, well-trained, and disciplined,” she adds. “They are brave fighters and can stop ISIS, but they have only light weaponry and very little ammunition, while ISIS is using the latest and greats U.S.-made armed vehicles and tanks (seized from Iraqi forces after U.S. forces pulled out of the region).  “The U.S. should allow Kurds to buy weapons.”

Today the Washington Post reports that the U.S. has begun arming Kurds through a covert CIA operation. The newspaper cites two unnamed officials as sources.  The Post article also states, “U.S. military official said that the Pentagon and the State Department are discussing other possible ways to deliver weapons to the Kurds through open channels, but that they would need the legal authorization to do so. U.S. arms sales normally are restricted to sovereign or central governments.”

The Kurdish American Society (www.usakurds.org)  has posted a thank you letter to President Obama, which reads in part:  “The Kurdish Americans and Kurds in general rejoiced when we heard you make the announcement to help the stranded Kurdish Ezidis (Yazidis) as well as the Christian and other minorities in Iraq who are facing extermination at the hands of the enemy of humanity—the IS terrorists. Your decision to help the stranded Kurds outside the Kurdish Regional Government (KRG) area is the continuation of the humanitarian American spirit that started with Thanksgiving four centuries ago in Plimoth. As the rest of the world knows, this tradition is unique in the history of mankind.”

The Kurdish people have long faced persecution, from the Ottoman Empire a century ago and from Iraqi dictator Saddam Hussein, who gassed the Kurds before he was deposed during the U.S. invasion.  Now the persecution by ISIS has once again caused Kurds to flee into the mountains.

Massoud Barzani, the president of Kurdisatan, has appealed for international military help, CNN reports.In addition, Barzani has asked the Parliament to hold a referendum calling for Kurdish independence.

Amina predicts that over 95% of Kurdistan’s people will vote for independence.

A petition calling on President Obama to support independence for Kurdistan has been launched at WhiteHouse.Gov.  It was written by an American high school student and has drawn support in Kurdish-American groups and around the world.  As of today, more than 100,000 people have signed the petition at https://petitions.whitehouse.gov/petition/support-kurdish-independence/wk7K9SSp

San Diego has one of the largest populations of Kurdish people in the U.S. and many of them  live in East County. Often, they came here not speaking any English, but have assimilated as has Amina, a succesful poet who attended Grossmont Community College in El Cajon and later graduated from San Diego State University.

Her poetry reflects haunting memories of her homeland, as this excerpt from one of her poems reveals. Though written before the current confllict, her words convey the nightmare that she left behind--a nightmare many more Kurdish people are once again now facing:

She wants her hand to seize the pen,

dig the soil and plant seeds of peace.

She wants to ignore the images of war,

the images of burned land

and men running in flames

and dirt swimming in red,

and birds huddled on gray.