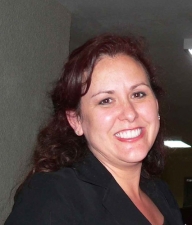 August 30, 2012 (Rancho Bernardo)-- At a gathering today in Rancho Bernardo outside the Republican party’s county headquarters, members of labor and the Democratic Party reacted to the Romney\Ryan ticket.

Lorena Gonzales, Secretary-Treasurer CEO of the San Diego and Imperial Counties Labor Council, AFL-CIO, issued a statement which read: “In President Obama's first term, we've seen 4.5 million new private sector jobs, more than one million jobs saved in the auto industry alone, and tax cuts for 95% of working families. And tonight, we'll listen to Mitt Romney accept his party's nomination as the standard bearer for a plan to dismantle Medicare, destroy Social Security, and hand out more tax breaks to corporations and millionaires.”

She added, “While Romney got rich from outsourcing and layoffs, the President is working to close loopholes that reward companies that ship our jobs overseas and to finally provide incentives for businesses that bring jobs home. For working families, the choice this November couldn't be more clear.”

Jess Durfee, County Chair of the Democratic Party. said he’s frustrated to hear the GOP offer “nothing but tearing down the President” and said Republicans have not presented any plans to help the American people or address the very real needs of the middle class.

Regarding last night’s speech by Congressman Paul Ryan, Durfee said the Vice Presidential nominee "stood there and told lies." Ryan even blamed the President for the closing of a GM plant in Wisconsin that was "closed down during the Bush term." If he is willing to lie over things like this, Durfee asked, what other extremes is he willing to go to?

Vince Hall, Vice-President of of Planned Parenthood for the Pacific Southwest chapter (which covers Riverside, Imperial and San Diego County), said that Romney and Ryan continue their war on women, started two years ago. Both want to eliminate all funding of an organization that serves three million women a year. Among the services provided are "cervical cancer screenings" and mammograms.

Both Ryan and Romney are committed to eliminating "all Federal funding to birth control, a decision that would cause more expenses to the Federal Government.,” Hall stated. He added that this would also "have devastating consequences for women to be full participants in the economic recovery."

ECM asked Hall about our local Congressional delegation, and he went into the "extreme record of Representative Daryl Issa (R-49) who convened a Congressional hearing to deal with women's health care issues, but where no woman was allowed to testify.

According to Hall, both "Mr Issa and Mr Hunter exhibit the worst of sexism and disrespect of the women in their districts and of America."