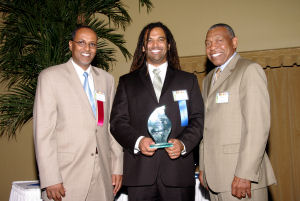 The evening kicked off with live entertainment from African band, Sene Africa, and tasty appetizers including sambusas and Somali Tea. One highlight of the evening was surprise guest Bob Montgomery, executive director of the International Rescue Committee of San Diego who praised Somali Family Service for their work in the community, noting the success he’s seen in individuals who have come through SFS programs over the years. Elected officials Councilmember Marti Emerald, Councilmember Tony Young, and Salvatore Giametta, a representative from County Supervisor Ron Roberts’ office, also came out to the event and gave presentations to show support for Somali Family Service. 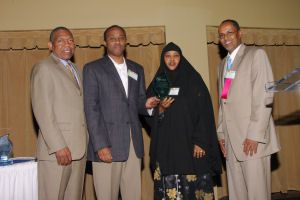 Seven community leaders and organizations were also honored for their work in the Somali refugee community including leadership, innovation, and health and wellness. Honorees included Ali Artan, Young Professional; Carmen Chavez, Attorney and Executive Director at Casa Cornelia Law Center; Dory Beatrice Griffith and the La Jolla Golden Triangle Rotary Club; Jesse Mills, Ph.D., University of San Diego; Families Together Program,  Horn of Africa; and The Parker Foundation.  Each honoree was honored to be recognized for the work they had accomplished, also looking ahead to future involvement with the community.  “I’m very enthusiastic about moving into even better eras with Somali Family Service and the community,” said honoree Jesse Mills, Ph.D.

"The awards ceremony is a milestone for both our community and our organization as we move forth in expanding our services to aid and advance the East African refugee community in San Diego,” said Ahmed Sahid, executive director of Somali Family Service. “2011 has been a great year so far and we have high hopes for what the next year will bring as well.”

All funds raised will go towards improving the quality and reach of Somali Family Service programs. Somali Family Service offers its clients a wide variety of services including economic development programs, health services and a youth development program. Over the course of 2011, SFS served approximately 2,500 clients, hosted its 3rd Annual Health Fair, helped members launch 50 new businesses, and saw 70% of new arrivers secure a job within six months of coming to the United States.

Somali Family Service, guided by its community champions, helps Somali and other East African families in becoming responsible, independent and contributing members of San Diego through its programs that promote health, educational and economic success, and leadership efforts.  Somali Family Service has developed a number of critical strategic collaborations with established organizations and groups within San Diego to serve the 30,000 Somali and East African refugees living in the city.