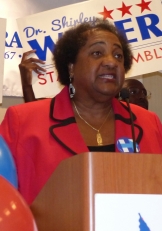 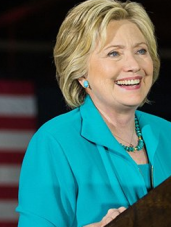 "It is an amazing experience to believe we will have the first opportunity to elect a woman president—to see what people used to say was the impossible happen.” – Assemblywoman Shirley Weber

June 8,2016 (San Diego)—For the first time in U.S. history, a woman is poised to be the nominee of a major political party on the presidential race in November. Hillary Clinton has taken nearly 56 percent of the vote in California over Senator Bernie Sanders at 43 percent, with 99% of precincts reporting, capturing enough pledged delegates to  have a majority nationwide.

Clinton, who also leads soundly in superdelegates,  is now the presumptive Democratic Party nominee, though Sanders has said he will remain in the race until the July convention.

Clinton changed her Twitter photo to read “History made.”  Declaring victory, she stated, “"Tonight's victory is not about one person. It belongs to generations of women and men who struggled and sacrificed and made this moment possible." She also took aim at Donald Trump, the presumptive Republican nominee.  “trying to wall of Americans from each other. When he says let's make America great again, that is code for let's take American backwards." She criticized Trump for recent attacks on a judge of Mexican descent as well as his mocking a disabled reporter and calling "women pigs."   She added that her mother taught her never to back down from a bully.

At a Democratic Party celebration at the Westin San Diego Gaslamp,  Assemblywoman Shirley Weber, whose district includes some East County and San Diego communities, voiced joy at the outcome. “It is an amazing experience to believe we will have the first opportunity to elect a woman—to see what people used to say was the impossible happen.”

Weber also took aim at Donald Trump’s “make America great again” slogan.  The Assemblywoman, an African-American daughter of a sharecropper, observed, “He talks about the good olddays but they were not good for me.”

She slammed Trump for refusing to releases his tax returns and for having no record of accomplishments, as well as Trump’s negative statements about women,  Mexican immigrants, Muslims and others.  “We have the most inclusive vision to move this nation forward,” she said, adding, “I love a good fight – and this is one!” 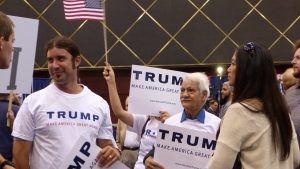 Trump won with 75% of the vote in California, as the only Republican candidate still in the race, and has more than enough delegates nationwide to be the presumptive nominee for the Republican Party.One Trump supporter in San Diego groused,"Hillary will ruin this country."

Reading from a teleprompter instead of delivering his usual unscripted remarks,Trump told voters, “Together we accomplished what people thought was absolutely impossible.”  He noted that his campaign received more GOP votes than any campaign in history.  He then took aim at Clinton.  “To those who worked for someone else in either party, I’ll work hard to earn your support.”   He issued a specific appeal to Sanders’ supporters noting he opposes “terrible trade deals.”  He stated, “My goal is to bring people together but if I am forced to fight for something I will never, ever back down and our country will never back down.”

Miriam Plotkin, a Democratic Central committee from La Mesa and Clinton supporter, stated, “I’m definitely hoping the Vice President she chooses will unite the party.  I do believe Bernie Sanders will be asked first, and if for any reason he does not accept, that [Senator] Elizabeth Warren will be asked second…The only way to unite people when the separate is to come together.”

Clinton also won New Jersey and New Mexico in yesterday’s primaries, while Sanders won North Dakota and Montana.  The two candidates tied in South Dakota. But California, which has by far the most delegates of any state in the nation, awarded 257 to Clinton and 188 to Sanders, virtually securing Clinton’s victory with 2184 pledged delegates to Sanders 1804. When superdelegates, who vote in July, are added in, Clinton’s lead widens to 2755 to 1852.

Despite the seemingly insurmountable odds, Sanders told supporters he stay in the race through the last primary next week in Washington D.C. and then take his fight for social, economic and environmental justice all the way to the convention in Philadelphia.  But he added that his fight does not end with the primary.  "Let me thank you all for being part of a political revolution," Sanders said. "We understand our mission is more than just beating Donald Trump, it is transforming our country."