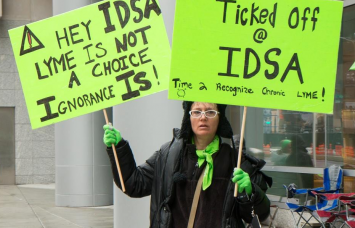 September 27, 2015 (San Diego)--The CDC estimates that there are more than 300,000 cases of Lyme disease every year in the United States. However, many experts dispute that, saying the true number is likely well over a million. Ticks carrying Lyme disease are found in San Diego County,  the County’s Environmental Health Department reports.

A coalition of groups representing Lyme disease patients plan protests outside the Infectious Diseases Society of America ((IDSA) at its meeting in San Diego October 7-11.

“Because of rampant “Lyme denialism” by the CDC and the medical establishment, hundreds of thousands of additional cases of Lyme disease go undiagnosed and untreated—and people are left to suffer,” says Jen Williams, a spokesperson for the coalition of patients and their advocates. The Centers for Disease Control endorses Lyme disease guidelines for physicians determined by the IDSA—and insurance companies use those guidelines to deny payment or Lyme treatment, the groups contend.

Williams calls the IDSA guidelines “Lyme denialism.”  She states, “The guidelines of this private medical association define Lyme disease so narrowly that many people are denied treatment altogether. Based on these guidelines, even people in the early stages of the disease—when they can be most easily cured—are often told they don’t have Lyme and are refused proper medical care.

This sets the stage for the disease to become chronic, burrowing into the body and potentially causing a lifetime of misery and disability. Furthermore, the IDSA also denies the existence of chronic Lyme, as people get sicker and sicker.”

The IDSA had a special review panel study its 2006 Lyme Disease recommends and concluded no changes were needed to treatment guidelines.  A press release on the ISDA website notes that long-term use of antibiotic treatments for Lyme can lead to antibiotic resistance and suggests symptoms such as fatigue are common in the general population.

The protest and a vigil planned will include:

The groups co-sponsoring the protest and vigil are LymeDisease.org, the MayDay Project and the San Diego Lyme Disease Support Group.

For more information about why  the groups are protesting against the IDSA, see:www.lymedisease.org/get-involved/take-action/why-we-protest-against-the-idsa

a strong, strapping guy, who has been struck down by Lyme disease. Apparently they never have figured out what is it exactly, and he does his best to make the most of his life while being handicapped in his mobility and with fatigue ....by a tick.(He knows that.) So it deserves attention, including research and better treatment.

He didn't get diagnosed until a couple of years or more after he was bitten by a tick on the East Coast, and wound up with the IV antibiotics. I'm flabbergasted that a medical group is now advising against that.