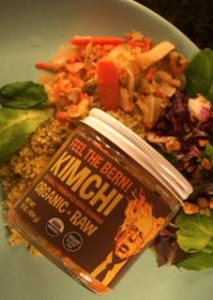 January 14, 2016 (Poway) — Just in time for the presidential primary season, Gold Mine Natural Food Company is launching its new “Feel the Bern” Organic Raw Kimchi to drive donations to the Bernie Sanders presidential campaign. Online customers can enter a discount code at checkout. The code will discount the entire order by 20%, and that savings can to be donated to Bernie 2016 by following an ActBlue link.

“Bernie Sanders is an honest politician and we believe his supporters are among the best in the world,” says Gold Mine owner and founder Jean Richardson. “We are on the honor system here.”Bernie is a man after my own heart,” adds Richardson. “We both protested the Vietnam War, participated in the Civil Rights Movement, and see eye to eye on all of today’s issues: income and wealth inequality, single payer health care, free education, climate change and more.”

The local food company isn’t the first vendor to cash in on products honoring—or dishonoring—presidential contenders.  Delis in both New York and New Hampshire have menus touting “Trump sandwiches” filled with bologna, named after the outspoken Republican contender.  Naming foods after famous politicians is a tradition that dates back centuries, from Napoleon pastries to Washington Pie to Ronald Reagan’s Hamburger Soup (a recipe issued by the President himself).

Gold Mine is a 100% woman-owned small business, started on a shoe string 30 years ago. During the past five years, the business has seen a healthy increase in kimchi sales. Richardson explains, “We make our kimchi by hand in small batches. It is raw, organic, vegan, and fermented in ceramic crocks to maximize freshness and flavor. In 2013, our kimchi was a ‘Specialty Outstanding Food Innovation’ (sofi) finalist, winning an award at the NY Fancy Food Show. It represents the best of the best, and it’s made right here in the U.S.A. using California produce.”

Feel the Bern Organic Raw Kimchi is available at: www.wefeelthebern.com.