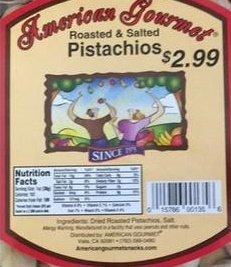 March 26, 2016 (San Diego) – American Gourmet’s roasted and salted pistachios are made locally in Vista and sold at stores countywide, including Trader Joe’s. Now the company has announced a recall due to possible salmonella contamination.

The U.S. Food and Drug Administration announced that the company was asked by its supplier of pistachios to initiative the voluntary recall.  In addition to San Diego County, the products were also sold in San Bernadino and Riverside Counties.

The recalled packages have best-by dates between November 5, 2016 and March 13, 2017.  The recall includes 2.5, 4.5 and 7.5 ounce packages. Consumers can return the recalled products to retailers for full refunds.

This marks the second pistachio recall this month.  Wonderful Pistachios, also a California company with products sold in Trader Joe’s and other recalls, announced

Eleven people were sickened earlier this month when another California-based company, Wonderful Pistachios,  announced  similar recall of its packages, which were sold by retailers including Trader Joe’s.

No illness have yet been linked to the latest recall. However salmonella poisoning can cause fever, nausea, vomiting, bloody diarrhea and abdominal pain as well as more serious illnesses including aneurysms, endocarditis and sometimes fatal infections particularly in children, the elderly or people with weakened immune systems, the FDA reports.