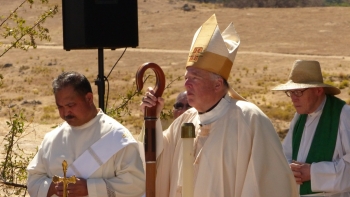 Update May 29, 2020: The U.S. Supreme Court today declined to hear an appeal of the Ninth Circuit appellate court's ruling against a Chula Vista church. By a 5-4 vote, the majority of justices found that California's llimits on attendance size at in-person woship services during a pandemic did not violate the First Amendment or discriminate against churches, noting that simlar or more severe restrictions apply to concerts, movie theaters and other venues with gatherings.

Photo by Miriam Raftery: Bishop Robert McElroy, during 2018 bicentennial celebration at the Santa Ysabel Mission, has called for Catholic masses to resume in June, but parishioners could opt to continue online services if they choose.

May 27, 2020 (San Diego) – San Diego County Health officials yesterday announced that houses of worship can resume services, with limited numbers of people and other changes. The action follows Governor Gavin Newsom rolling out new state guidelines allow in-person worship services and ceremonies, though officials are encouraging alternatives such as online worshipping or outdoor services to help protect parishioners and staff from COVID-19.

Under the county health rules, churches, synagogues, mosques and other places of worship must limit attendance to 25 percent of capacity or 100 people, whichever is smallest. Worshippers not in the same household must sit or stand six feet apart.

The state recommends additional steps such as temporarily discontinuing singing, which has been found to spread the virus through exhaled droplets, causing COVID-19 outbreaks tied to several churches, resulting in illnesses and deaths.

Religious institutions are also urged to take other steps such as avoiding handshakes and hugging, discontinuing use of a shared communion cup, providing pre-packaged communion items on seats prior to the service, and using single-use prayer materials.  Church staff should be screened for fevers, cleaning and sanitation measures should be followed, and contributions should be given through secure drop boxes or touch-free electronic offerings instead of passing a collection plate.

Newsom’s stay-home order prohibiting all gatherings, including religious services, since March 19 has been challenged in federal court by the South Bay United Pentacostal Church in Chula Vista, which argues that the ban violates the First Amendment.

The Ninth Circuit Court of Appeals ruled 2-1 to deny a temporary restraining order sought by the Chula Vista church, upholding the Governor’s action as constitutional to save lives during a pandemic.  Juges Jacqueline Nguyen and Barry silverman wrote for the majority, “We’re dealing here with a highly contagious and often fatal disease for which there presently is no known cure.”

The church has appealed to the U.S. Supreme Court. The U.S. Justice Dept. has filed a brief in support of the appeal.  Charles LiMandri, lawyer for the Freedom of Conscience Defense Fund representing the church, has called the governor’s rules “blatant religious discrimination.”

President Donald Trump has demanded that governors nationwide allow immediate reopening of places of worship, despite some 100,000 deaths and 1.6 million cases of coronavirus in the U.S.  “In America we need more prayer, not less,” the President has stated. ABC news reports that it is unclear, however, what authority if any the President may have to order Governor’s to reopen churches.

California’s health and political leaders plan to review the situation in three weeks, along with county officials, to determine whether further relaxation of the rules regarding worship services may occur, or any restrictions reimposed, depending on any outbreaks tied to religious services.

Local religious organizations are now assessing when, how, or whether to reopen for in-person services.

Times of San Diego, an ECM news partner, reports that San Diego’s Roman Catholic leaders are planning to resume in-person masses in June. Bishop Robert McElroy letter sent to priests across the diocese recently indicating that the feast of Corpus Christi, June 14, is the target date for resuming in-person worshipping, however individual pastors would be allowed to resume daily mas as early as June 8.

Parishioners are not required to attend masses and may still opt to worship online. In person mass services will include social distancing and funerals may resume, but with closed caskets.  Other changes will include no wine during Communion, no wafers placed on tongues, face masks required, and singing will not occur except by a single vocalist; instrumental music will also be allowed. Prayer books and hymnals will be removed. Parishioners will be encouraged to wave or nod instead of shaking hands or hugging.

Chabad of East County today posted on Facebook that for now, it plans to continue serving its Jewish members virtually.  “No matter how quickly society reopens, we are not likely to enjoy large gatherings this Shavuot and will likely need to do it at home,” the post reads. “Shavuot includes delightful traditions such as adorning the home with flowers and enjoying dairy treats, and somber customs such as studying Torah all night and Yizkor—remembering our loved ones. It includes rules that are unique to Shavuot and others that are common to all Jewish holidays. We will present and explain these traditions and empower you to do it yourself.”

The Universalist Unitarian church has established a Safe Congregation Team  that has advised congregations to continue virtual gatherings through May.  Guidelines posted online note that “our risk taking and our protective actions affect far more than just ourselves…Our affirmation that good science, coupled with our UU values, must be the basis upon which we make decisions about in-person gatherings.”

The UUA site notes that in addition to spiritual needs, churches should consult with the congregation’s attorney and insurance company regarding potential legal liability if COVID-19 transmission were to occur. Another potential risk could be rental groups’ operations putting congregations or guests at risk.

Ultimately, the UUA guidelines voice “our deep hope that we as a country, and as a world, will not return to `normal’ when the pandemic is over. We seek to live into a `new normal’ of more justice, more love, more equity, more sustainability, and more peace.”