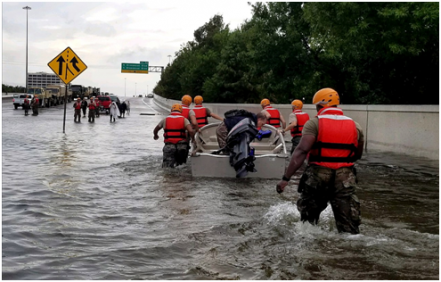 August 29, 2017 (San Diego) – Rescue personnel from the San Diego region including East County are heading to Texas, where  Hurricane Harvey, a category 4 hurricane since reclassified as a tropical storm,  has dumped the heaviest rainfall ever recorded on the U.S. mainland—50 inches or more in places.

Much of Houston, Texas is submerged beneath a swath of floodwaters 50 miles wide.  so much rain fell that the National Weather Service had to add new color coding to its maps.

At least eight people have died.  An estimated 1.7 million  have evacuated  in Texas and Louisana as the storm continues its destructive path, according to the White House website, with many people still awaiting rescue, trapped amid rising waters. Now, a levee south of Houston in Brazoria County has broken and residents in its path are ordered to get out immediately. 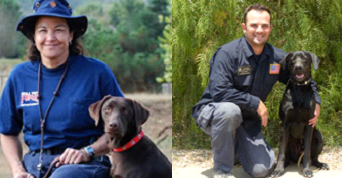 Heartland Fire and Rescue, which serves El Cajon, La Mesa and Lemon Grove, announced  that several of its firefighters are en route to Texas as part of California Task Force 8.   Rescue dog handlers from San Diego Fire and Chula Vista Fire departments are also dispatched to the area.

The National Guard has been deployed, but rescuers are so overwhelmed that the Federal Emergency Management Agency (FEMA) is asking volunteers to assist in the desperate efforts to save people trapped in rising floodwaters, some running out of food and water,  ABC news reports.  Large churches, mosques, and other religious centers have opened their doors to evacuees. The Houston Astrodome has packed in nearly double its capacity, taking in over 9,000 people in need, according to CBS.

For information on how you can donate or volunteer to help the victims of Hurricane Harvey, visit http://abcnews.go.com/US/hurricane-harvey-victims/story?id=49451305.

to save lives in Houston because the Fire Chief won't let them go, here.