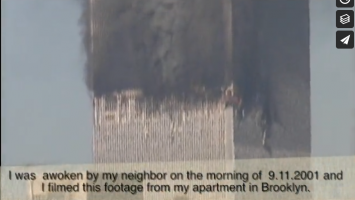 September 11, 2021 (San Diego) – Twenty years after the September 11, 2001 terrorist attacks claimed thousands of lives in New York, Washington D.C. and  Pennsylvania,  San Diego County residents shared their memories of the tragedy in response to inquiries from East County Magazine and on social media.

Sheriff Bill Gore posted on Twitter, “The images are seared into our memories. We watched in disbelief as passenger planes turned into weapons. It was a time of great pain and heroism. Honor guard members reflect on 9/11 and how it transformed their purpose into a life of service. https://www.youtube.com/watch?v=yLuKaoVAH1M “  Many of those in the honor guard spoke of how the attacks inspired them to protect their country.

Others reacted differently. Local resident Mar Tomic was in New York City to witness first hand the worst terrorist attack on U.S. soil.  “I had a chance to see it on TV but also from my apartment in Brooklyn. I took my camera and wandered the streets for many days after the tragedy. I edited this video 7 days after 9.11.”  View video:  https://vimeo.com/29079284.   Tomic’s video captured not only the chaos and sorrow in the days following the attacks, but at a time when the nation was gearing up for war to retaliate against Afghanistan for harboring Al Qaeda leader bin Laden, Tomic’s footage also showed some New Yorker’s rallying for peace  even amid candlelight vigils for those lost.

Some were children when they witnessed the horrific events unfolding live on TV.  East County resident Zack Gianino recalls on Facebook, "I’ll #NeverForget waking up early to my Mom watchin the news.I asked her, as I watched the 2nd plane hit live, “What movie is this?” She looked at me & said “This isn’t a movie.”I’ll #NeverForget in 3rd grade watching the WTC’s burning on a TV in our classroom."

Many suffered travel disruptions. San Diegan Marilyn Steber was on a plane from the East Coast on 9/11. “I had taken off from Louisville in the dark going to Charlotte to meet the plane that would fly nonstop home to San Diego. I think I saw the Atlantic Ocean before the sun came up as we took off.”  But when word came that hijackers had crashed planes into the World Trade Center and the Pentagon, with a third plane lost in a Pennsylvania field, all planes nationwide were grounded.

“I got the first plane to California after 3 days and landed in Ontario, California where I rented a car for the drive to San Diego. Oh, before I got out of Texas I was hauled off the plane coming directly to San Diego because my luggage hadn't gone through Security. How was I to know? Two hours later I got the plane to Ontario. Next to my trips to England and Holland, I think that was the most expensive,” Steber recalled.

For some, the psychological impacts have been far-reaching.  Amie Zamudio posted on Facebook, “Did you know we have a houseless person who lives in #SanDiego who is a survivor of the 9/11 attacks? He prefers not to be indoors in overcrowded spaces.”

San Diego author Walter Meyer posted his emotional memories of the historic date as an entry in his “plog,” a diary he kept during the pandemic lockdown. Below is his entry in full:

The morning of September 11, I woke to an answering machine message from my friend Bryan who was supposed to take me to the airport. His message said something like, “I can’t believe what’s happening in New York. This is horrible. I guess I won’t be taking you to the airport.”

I was supposed to fly to Pittsburgh that morning to be with my parents as my father was scheduled to have brain surgery on September 12. Bryan had offered to take me to the airport.

I called Bryan back and got his answering machine. I left a message something to the effect, “I don’t know what is going on in New York that could possibly influence your ability to take me to the airport in San Diego. Get off your butt and get over here.” I jumped in the shower. When I got out of the shower, the red light was again flashing on my machine and Bryan’s voice, even more frantic than last time said, “Turn on your %#*& television!”

I did. It took me a while to comprehend what I was watching. I channel surfed in hopes this was some sort of a mistake or that one of the announcers would just tell me what the hell was happening. After New York came the news of the Pentagon. Then the plane near Pittsburgh. I was born and raised in Pittsburgh. I had lived in Somerset, Pennsylvania for a year. Was anyone I knew on the ground killed there?

I called Bryan and he tried to bring me up to speed on a story he had been following for over an hour. I called my mother. She said there was talk on one of the television stations that there were over 50,000 people lost in the Twin Towers.

She had heard from her cousin, my godfather, who lived in the tallest building on Mount Washington overlooking the city of Pittsburgh. He and his wife had been evacuated for fear that the wayward plane being tracked on radar would just be crashed into the nearest large target of opportunity. As Flight 93 made a low turn near Pittsburgh, people fled the skyscrapers. That plane eventually found a field in Somerset County southeast of Pittsburgh.

I asked myself what so many did that day: could this all be real? I wanted my alarm to go off and wake me from this nightmare. I turned on my computer and checked web site after web site for updates as the television droned on.

All day long Bryan and I called each other, needing repeated verification of what was happening. And all day long I exchanged phone calls with my mother. The hospital said they couldn’t delay my father’s surgery—his condition was life-threatening if not corrected now; it would go on as scheduled the next day. A few more calls. My sister would drive down from Erie, Pennsylvania and stay as long as needed.

Later that evening, after my parents would normally have been in bed, the phone rang again. When it was my mother again, I knew something was wrong. But it wasn’t with my father; my mother had just received a call from a neighbor saying that Ken Waldie, with whom I had played as a child, who had gone to my grade school and high school, was on Flight 11.  His mother still lived in our neighborhood.

It was the awful icing to a horrible day of worldwide and personal trauma.