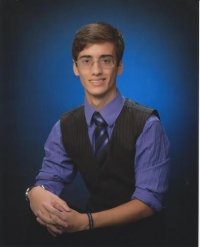 The ACT consists of tests in English, mathematics, reading and science. Each test is scored on a scale of 1-36, and a student's composite score is the average of the four test scores.

In a letter recognizing this exceptional achievement, ACT CEO Jon Whitmore said, “While test scores are just one of the many criteria that most colleges consider when making admission decisions, your exceptional ACT composite score should prove helpful as you pursue your education and career goals.”

An Academic All-American, Spencer is also a published author, four-year member of Helix’s Academic Team, and Debate Captain at Helix.  In 2014 he was a semi-finalist in Congressional (Senate) Debate at the National Speech and Debate Tournament in Kansas.  Spencer plans to study political science and physics when he begins his university education in the fall.

ACT test scores are accepted by all major U.S. colleges. Exceptional scores of 36 provide colleges with evidence of student readiness for the academic rigors that lie ahead.