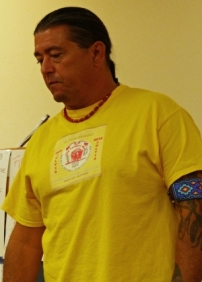 Update Oct. 7, 2016: Hear our interview on KNSJ Radio with Bobby Wallace by clicking the audio link

Winter will soon bring bitter cold to the Standing Rock Sioux encampment in Cannnonball,North Dakota, where “hundreds of tribes” have sent thousands of people camp out and take a stand against the Dakota access oil pipeline.  Wallace has been organizing relief supplies gathered by local tribes to support  the effort.

Speaking last week at an Activist San Diego meeting in San Diego,  Wallace told of the reactions when he arrived with the first caravan of supplies for the three camps.”Men, people, had tears in their eyes.  People hugged us…just knowing people far away cared.”

Members of nine local Native American bands participated.”We received support from nearly every Kumeyaay tribe. Huge,” Wallace told  ECM.  That includes Barona, Viejas, and tribes as far north as Los Coyotes in the mountains and as far east as the Quechan in the desert.

The next caravan departs October 8th.  Supplies urgently needed include blankets, wood stoves and warm clothing.  Without that,  Wallace says those emcamped “are gonna freeze—they are only protected by tipis.” Also needed are school supplies for children at the camps.

Donated items can be brought to 2004 Akuunyaay Way,Lakeside 92040.  The Bernie Sanders brigade is also gathering supplies locally for the relief effort.

In addition, money is needed to pay for legal defense.  The Agua Caliente band of Cahuilla Indians has donated $250,000 to the Standing Rock Sioux legal defense fund, the Desert Sun reported today. Those seeking to donate may contact  Bobby Wallace at 61-318-2643.

“Who puts a pipeline right on the Missouri River?” asks Wallace, who stood at the site, reflecting, “I could feel great sadness.” He and others standing up for the Standing Rock Sioux believes water belongs to the people.  “We know that water is life.”

Those gathered in South Dakota call themselves “water protectors,” not protesters.

Today,  Wallace watched with sadness as video of the arrests at the encampments spread across social media.  “Nobody has weapons,” he said of the tribal members being arrested by heavily armed officers and sprayed by pepper spray or another chemical from a plane. “My hopes would be to take into consideration these are people trying to have a ceremony that care about their water.  The water is for everybody,”Wallace states.

A rally will be held October 30th from11 a.m. to 4 p.m. at Mission Beach, on the grass across from the roller coaster. An earlier rally in Agua Caliente drew hundreds of people.

Wallace believes it’s important to take a stand,  noting that water “poisoning” is happening in many places due to fracking, oil lines, mining and pollution. He is also outraged at desecration of tribal burial grounds locally by the Navy at its Naval Seal training ground. “They are crushing up my ancestors,”he says. “This is the truth.  If we don’ keep up,they’re going to keep poisoning us.”

Olympia Beltran from  Sonora,Mexico, also spoke at the ASD meeting, telling how the Mexican government rerouted a river and took water away from the Yaqui people.  She said a decfision soon will determine if oil companies will be allowed to inject chemicals into an aquifer in San Louis Obispo,  California. (Comments can be made through www.conservation.ca.gov  through October 12.)

Another issue is local:  The Regional Water Quality Control Board will meet here soon over issues involving NAASCO and another polluter failing to clean up waters of San Diego Bay as promised—a site that in the past served as calving grounds for grey whales,  Beltran said.  She wants to use Standing Rock to draw attention to water issues in California.

Wallace wants to create a hub locally to share ideas and grow a  movement to fight against the Dakota pipeline and other projects that destroy clean water and threaten Native American values of protecting the earth.

“We all need to collaborate. This is everybody working together,” he says, urging the public to friend him on Facebook . “Take it to heart and share” on social media, he urges.

An ASD representative indicated concerned people can also take money out of big banks that back the company responsible for the Dakota Access Pipeline, such as Wells Fargo and Chase.

Wallace is no stranger to involvement in big events.  He’s worked with the cofounder of the Longest Walk,a cross-country trek organized by Native Americans.  (The next walk leaves in February from Alcatraz, arriving in Washington D.C.in July and aims to draw attention to domestic violence.  You can support the walkers at www.gofundme.com/n9qbmvn2 .)

He believes the water defenders are having an impact. Earlier this month, President Barack Obama ordered a temporary halt to construction of the pipeline section most objectionable to the Standing Sioux , and called for other actions to better provide for Native American voices to be heard in decisions involving energy projects.

The Standing Rock gathering has swelled dramatically since Wallace’s first visit,  growing from about 1,500 to 10,000 or more by some accounts—the largest such gathering since Wounded Knee.

For Wallace,  the need for action is critical—with no time to rest.”I’m tired, for a long time,” he admits, then adds, “but I can sleep when I die. Maybe we’re going to start something right here,and grow into something big.”

Interview with Bobby Wallace of Barona on Standing Rock caravan

It's interesting to me when activist get involved in environmental and American Indian rights but when something horrible is going on with the environment, water safety, citizen safety right in there own back yard they look the other way. Yes it is about the Jamul Indian village and all of the state and federal violations in addition to removal of tribal elders and funerary objects. I didn't see any questions asked to Mr Wallace or Mr Meza about what happened in Jamul when members were being removed along with funerary objects. Remeber when they were protesting in Coronado about artifacts and funerary objects being disturbed. So it's ok to protest there because no casino is going up right? It's hypocritical when it's ok in Jamul but not in Coronado or NoDak. What it's about is I've got mine and don't look in my backyard. Your still biased in my view when you don't call them out on their hypocrisy.
I was not bashing Boby Wallace! Said I appreciated his efforts in NoDak. I have stated on your website before that this is not about Native Americans. It doesn't matter who was putting up this casino! The FOE, Mason's, Mormons it dosent matter. It's unsafe form a traffic stand point, there were no environmental studies done, the community was out of the loop from the get go. My comments relate because there is stuff going on in our own back yard that are serious environmentally and driver safety wise. It's great he's going to help his people but where was he and Kenny Meza when all the crap was hitting the fan in Jamul? Just asking as a concerned East County resident. Many locals have said your magazine is biased on this issue. I gave you some time but your true colors are apparent.

to get more coverage. It just makes people want to stay away.  I've heard that comment from reporters at other media regarding some in Jamul.

I just put "traffic""Jamul" and"casino" into our search box and came up with many PAGES  of  articles on those issues:

Our most recent,  during DianneJacob's visit: http://www.eastcountymagazine.org/supervisor-jacob-speaks-out-protest-ov...  Even though I couldn't attend I did reach out to people there and to Jacob's offices and got photos and quotes;  we also reached out to the tribe who did not respond. How is that biased?  You are the one biased, wanting only one-sided coverage in your favor.

So it's simply untrue to say you haven't had a lot of coverage here.  Nobody gets every event covered.

As for complex legal questions we'll leave that to the courts to decide. I don't have a crystal ball and don't have a legal expert on staff for that analysis.

Jamul is a part of East County isn't it? In my opinion not much is covered in the way of the pending lawsuits, traffic concerns regarding the casino, the environmental impacts that will be done to this region once they start polluting the streams beds that flow next to the ecological center and all the way to Otay Lakes. What about investigating what is happening in this part of East County? Aren't we an important community? We had a meeting a couple weeks ago with several hundred community members in attendance with all the major media outlets. Where was East County Magazine?

We have about 5 times more requests for coverage of community meetings than our budget allows.

We try to cover  as many as we can.

Communities that help sustain our nonprofit with donations, such as many are doing, have first priority though we do cover some in communities that cannot afford to donate.

Your last meeting conflicted with a doctor appointment I'd made long before and I had no other reporter available.  With more donations we can hire and train additional community journalists.

Appreciate Bobby Wallace's efforts in NoDakbut it would have been nice to have his help during the forceable removal of long time Jamul Indian members from the Indian village at Jamul a few years back and more recently when they disinterred funerary Indian objects over the protest of these same Indian members who were forced out so they could build a 200,000 plus sq. ft. casino on 6 acres of land that doesn't even qualify for Indian gaming! In addition to probable polluting of stream beds that the EPA is now investigating. Where were you when all this was happening Mr. Wallace? Maybe you've been out of town the last few years?

While I understand frustrations over the casino there, I do ask that Jamul residents be respectful and not try to hijack comments on every Native American story on our site on seemingly any tribal issue anywhere unrelated to Jamul.

This story is not the place to slam someone doing a very selfless thing to help others,  as Bobby is doing.  This kneejerk reaction to slam any Indian and somehow blame all for the issues you have with the Jamul tribe sounds racist to some.  Let's refrain from hijacking threads on our site to unrelated topics.  The comments here are for discussion of support for the tribes gathered in North Dakota standing up for clean water rights, not other issues,please.