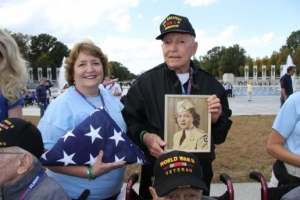 July 23, 2015 (San Diego)--On Aug. 15 at 5:30 p.m., Honor Flight San Diego will host “Comedy for a Cause,” a fundraiser at the San Diego Yacht Club. The fundraiser aims to raise monies to send World War II veterans on the organization’s October 2015 honor flight to Washington, D.C. to visit memorials dedicated to their sacrifice.

“To be able to send these veterans to Washington, D.C. and see what it means to them is a life-changing experience,” said Jeff Hall, chairman of Honor Flight San Diego. “It is our duty to honor these heroes and sustain this critical program. With 1,000 Word War II veterans dying each day, it is more important than ever. We hope everyone will come out to support this great cause.”

The Los Angeles-based comedy troupe “Veterans of Comedy” will headline the event. The group of military veterans turned comedians have performed both stateside and internationally.  Hundreds are expected to be in attendance, including active duty military and World War II veterans who have flown on Honor Flight, local business and community leaders, elected officials and special VIP guests.

The event will include social hour, dinner, live auction and silent auction.  Music will be provided by Indian Joe and the Chiefs and the national anthem will be sung by recording artist Steve Ybarra. Steve Lewandowski, a former Navy officer, will serve as the master of ceremonies.

Honor Flight San Diego depends on the generosity of the public to send veterans to Washington, D.C. For many, it’s the experience of a lifetime. Sid Zimman served as a dive bomber gunner in the Pacific during World War II and was one of veterans who made the trip to Washington in May 2015. “The trip was significant for me and I will remember it for the rest of my life,” said Zimman. “I have tremendous gratitude for the donors and all the people who made that trip possible.”

Each year, Honor Flights take hundreds of veterans to Washington, D.C. For many, it's their first time to D.C. and for many it is their last trip. Priority is given to the most senior veterans, currently World War II survivors, and to veterans who are terminally ill. Honor Flight San Diego has 250 veterans on the waiting list. The veteran’s trip is paid for through donations and costs approximately $2,000 for three-day experience.

Comedy for a Cause is open to the public. Tickets must be purchased in advance. For more information about Honor Flight San Diego, or to purchase tickets to Comedy for a Cause, please visit honorflightsandiego.org.

Honor Flight San Diego (HFSD) is a 501(c)3, nonprofit organization dedicated to escorting San Diego county Veterans to Washington, D.C. to visit and reflect at the memorials dedicated to their service and sacrifice. HFSD is a branch of the nationwide Honor Flight Network which consists of over 130 independent “hubs” across America. Veterans fly free thanks to the monies donated by individuals, foundations, associations, business owners and corporations who wish to recognize their contributions and thank them for their service and sacrifice to the United States and its citizens. More information about Honor Flight San Diego can be found at honorflightsandiego.org, or follow us on Facebook (facebook.com/honorflightsandiego) or Twitter @HFSanDiego.