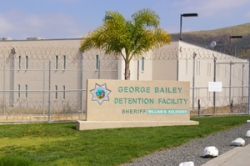 May 6, 2010 (San Diego) – A lockdown was been ordered earlier this afternoon at the George Bailey Detention Facility in Otay Mesa, a detention information assistant at the facility confirmed.

Incident Page Network informed East County Magazine at 1:03 p.m. that a riot occurred, resulting in “mass casualties” and a request for multiple medic units for victims.

The Sheriff has now issued a press release stating that approximately 35 African-American and Hispanic inmates engaged in an altercation. Non-lethal force was used to disperse the prisoners.  Three inmates were transported to a medical facility for treatment of injuries.

No further details are available at this time.

As a writer and book reviewer with the East County Magazine, and the President of Bethel A.M.E. Prison Ministry, that ministers to inmates at the George Bailey Center Jail, I find it particularly disturbing that there was a riot there between inmates there. As we generally go out to the jail on the 1st, 3rd and 5th Sundays of each month, we never got any indication that something like this would occur, especially a riot between Hispanic and Black inmates. A few weeks ago when I was last at the jail with a Frank Johnson of our Church, to minister to the inmates, a Rene Arieola from Guatemala asked us to pray for him and his family, and as he was scheduled to be released in a few days, he indicated that he would be coming to our Church to visit.

In the last year of our Jail/Prison Ministry going out to the George Bailey Center Jail, numerous inmates would ask us to take their prayer requests, and we would turn them in to our Prayer Service at our Church on Wednesday's, as I did for inmates currently in the downtown jail, and those recently released from Prison. While at the jail, we are actually locked in a small room that serves as a Chapel, along with the inmates, for about an hour and a half, which can be rather intimidating for the female members of our Jail/Prison Ministry.

A couple of months ago I served on a panel discussion with the San Diego County Sheriff, William Gore, at a forum titled "Prisoner Release 101," sponsored by "A New Path," in which we discussed issues that impact inmates at the George Bailey Center Jail and RJ Donovan Correctional Facility. It is ironic that the inmates at Donovan Prison just got off a 2 week lockdown a couple of weeks ago.

I trust and pray that order and calm comes to the George Bailey Center Jail soon.

How do I get involved with ministry at George Bailey? Any assistance is greatly appreciated.

Simply contact the Sheriff's Department about going through the orientation program of being a volunteer at the jail, or contact me at demoore21@sprint.blackberry.net.