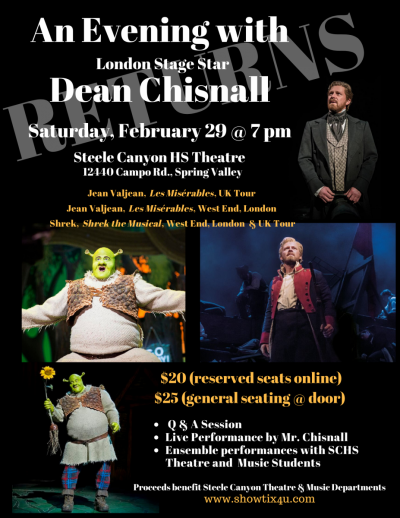 By Jennifer Doucet, President, Steele Canyon Players Drama Booster Club
Photo Credit: 1-3: Helen Maybanks
Photo Credit: Michael Wharley
January 29, 2020 (San Diego’s East County) -- London stage actor Dean Chisnall returns to Steele Canyon Charter High School February 26 to February 29 to help prepare the school’s theatre department for their production of Shrek The Musical premiering March 18th.  Who better to mentor the students than an actor who portrayed Shrek for five years on the London West End stage and on the UK & Ireland tour?
According to Chisnall, that’s 1,318 performances as Shrek; 5,742 hours in green make up; 25 cities and a total of 21 months on tour.  Locally, Chisnall will team-up with Steele Canyon Directors, Nicole LaBella (Theatre) and Heather Luck (Music), to instruct and inspire the Steele Canyon Players to portray the beloved Shrek musical theater characters.
He will also be the main event in “An Evening with Dean Chisnall” benefit night for the SCHS theater students at Steele Canyon High School on the evening of Saturday, February 29 @ 7:00pm. Open to the general public, tickets are $20 online/$25 door. Visit www.schscougars.org or order tickets directly at www.showtix4u.com.
Last year, as London West End’s Jean Valjean in Les Misérables, Mr. Chisnall accepted SCHS Music Director Luck’s invitation to come to America and meet the students of the Steele Canyon Players and Instrumental Music Department so that he might offer them advice and tutelage as they readied for their 2019 production of Les Misérables. 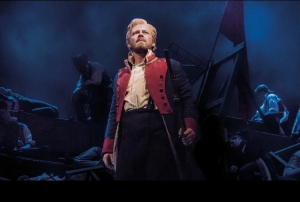 Photo (right): Dean Chisnall as Jean Valjean, Les Misérables, London West End, Queen’s Theatre
That visit was a mutually beneficial experience as Chisnall stated, “The students of Steele Canyon High have had a lasting impression on my life and I feel so incredibly fortunate to have visited. The work that Heather Luck and Nicole LaBella do is nothing short of phenomenal and I thank all involved for giving me the greatest gift and allowing me to share some time with so many inspirational people who are the future of the industry that I very fortunately find myself in”.
Putting his advice to work, the Steele Canyon Players had a successful sold-out run of their 2019 Les Misérables production and received the 2019 “Outstanding Ensemble” National Youth Arts Award San Diego/La Mesa. The students anxiously await Chisnall’s return to work with him again. 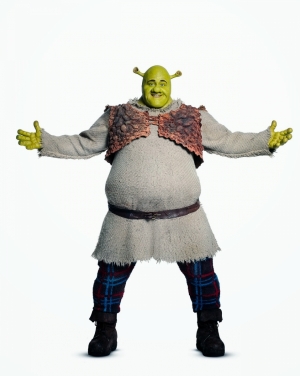 Photo (left): Dean Chisnall as Shrek, Shrek The Musical, London West End & UK Tour
Dean Chisnall is originally from Lancashire, England, and a 2005 graduate from The Arts Educational School of Musical Theatre in London. Beyond his tenure as Shrek and in addition to his current lead role as Jean Valjean in the UK & Ireland Les Misérables tour, he most recently appeared as Jean Valjean in London West End’s Les Misérables at the Queen’s Theatre. Other West End and international theater credits include The Woman In White, Never Forget, Blood Brothers, Mama Mia!, Evita, Cinderella and La Cage aux Folles. Also, he has a variety of television, recording and concert credits to his name.
The Steele Canyon Players are rising stars in the local high school theater scene. Under Theatre Director, Nicole LaBella and Musical Director, Heather Luck, students in the Steele Canyon High School Theatre and Instrumental Music departments produce an annual Fall play and an annual Spring Musical. The Spring production of The Sound of Music was named the Best High School Musical at the 2018 Broadway San Diego Awards after the first year of entering the competition that celebrates excellence in high school musical theatre. 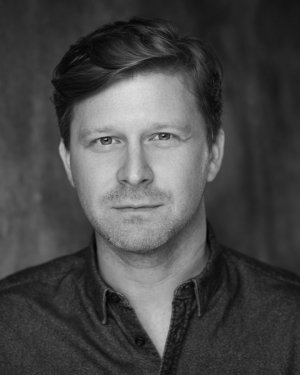