Photos and videos by Henri Migala

December 3, 2020 (Rancho San Diego) – Thanks to the valiant response of firefighters from multiple districts across the region, the #WillowFire in Rancho San Diego was held to 30 acres overnight.  One home was destroyed and six others damaged, according to Cal Fire.

But the damage could have been far worse, given that the fire started after dark amid howling Santa Ana wind conditions. (Video of high winds)

The fire started around 10:30 p.m. on Willow Glen Drive near Hillsdale Rd., swiftly racing through a canyon. Flames soon engulfed a home atop the ridge and scorched others, prompting late-night evacuations and a long night for both firefighters and residents. 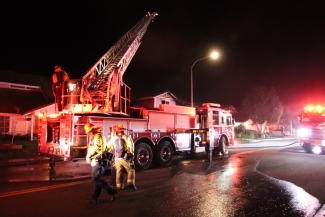 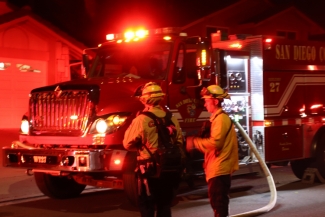 On Wind River Road, firefighters hacked through a garage door of one home, which sustained heavy fire damage, potentially saving some interior contents.

After dousing the home on fire, in the wee hours of the morning, firefighters went house to house, extinguishing hot spots caused by wind-blown embers that ignited structures, landscaping and mulch. 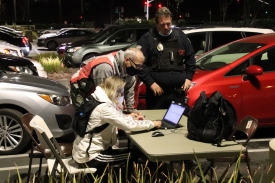 an evacuation center set up at the Edwards Cinema, the Red Cross set up a command center to welcome evacuees. A security officer on duty told ECM an estimated 300 people had arrived as of 1:00 a.m. Evacuees were provided with food and water. At least 22 hotel vouchers were also issued, including to families with children and elderly residents. But most chose to wait anxiously until the evacuation order was listed so that they could return home and learn if their residences had survived the fire.

The Humane Society set up an animal services incident command near Staples, across the parking lot from the cinema, to accommodate displaced pets and large animals. 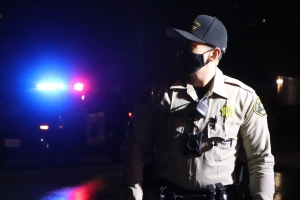 o was about three miles from each of my sisters' homes. Because they both live on hillsides, their houses are particularly vulnerable. Thank you to the sheriffs who helped with the evacuations and to the heroes from CAL Fire/San Diego and San Miguel Fire who saved so many residences.”

Cal Fire’s public information officer tweeted, “Near hurricane level winds are impacting Southern CA leading to an increase in wildfire activity. Although temperatures are decreasing this serves as reminder that wildfire danger is not over. Take the time to prepare you and your family!” 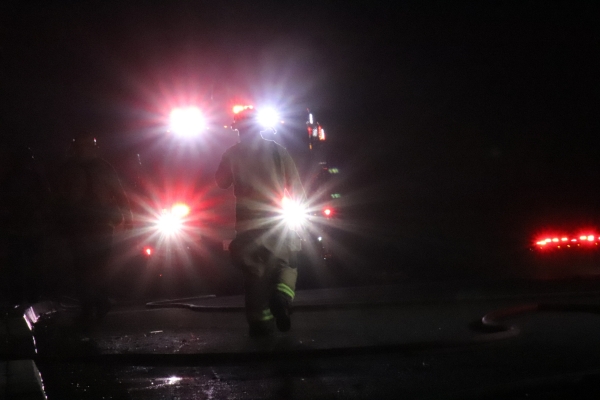 Photo below by Daniel S. Weber 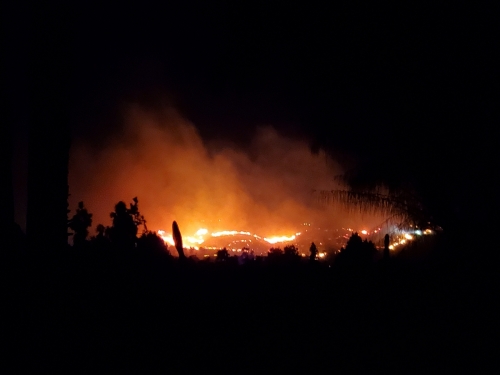