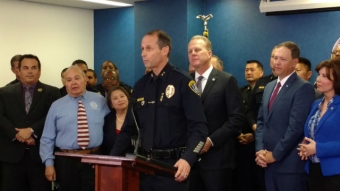 By Chris Jennewein, reprinted with permission by Times of San Diego, a member of the San Diego Online News Association

Photo:  David Nisleit at the press conference in the mayor’s office. Photo by Chris Jennewein

Mayor Kevin Faulconer made the announcement at an 11 a.m. press conference in his office accompanied by numerous community leaders.

“This is one of the most important decisions that I will make as mayor,” Faulconer said.

The mayor said he sought a new chief who understood the diverse communities of San Diego, and after a five-month nationwide search made the decision to promote a candidate from within the department.

“Mr. Nisleit’s steadfast community policing and unwavering commitment to the safety of all San Diegans makes him the ideal candidate,” Faulconer said.

Nisleit, who joined the department in 1988, followed his father onto the force and has a son who is an officer.

He has served in leadership roles in the SWAT, gang and investigations units and planned security for Comic-Con, the Women’s March and other special events. He is currently responsible for nine patrol commands, the Homeless Outreach Team and the Watch Commander’s Office.

“As a native San Diegan and someone who has dedicated the last 30 years of his life to this city and department, it is both a privilege and an honor to become the next San Diego Police Chief,” Nisleit said.

He said his first priority will be to stem the exodus of experienced officers. There are currently more than 200 vacant positions in the department.

Nisleit succeeds Shelly Zimmerman, who is retiring March 1 after three years as chief and 35 years on the force.

Zimmerman described her chosen successor as “an exceptional, proven leader who has given his all to our department.”

But City Councilmember David Alvarez said he needed to hear how the new chief will deal with the department’s long-term staffing crisis before confirming Nisleit.

“The public needs to hear detailed plans from the chief on how he will address the police department’s staffing crisis,” Alvarez said in a statement. “Unlike the secret panels established to conduct the search, the confirmation process for the new chief must be transparent.”

Nisleit’s appointment must be approved by the full City Council at a yet-to-be scheduled meeting.

Faulconer noted that Nisleit was ranked the top candidate by panels of both community members and law-enforcement professionals.

Nisleit was a member of the FBI’s National Academy Class 258 and earned his master’s degree in business administration and management from the University of Redlands.

He and his wife Darlene have three children, Derek, Gabriella and Ryan, who is also a San Diego Police officer.