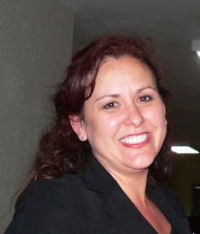 December 5, 2012(San Diego) -- Working families advocate Lorena Gonzalez will run for the 80th State Assembly District, vowing to seek the seat once it is vacated by the current assembly member, she announced this evening.  Gonzalez serves as the chief executive of the San Diego and Imperial Counties Labor Council, an advocacy organization that represents 200,000 local union workers in the region.  As Secretary-Treasurer of the Labor Council, Lorena led successful campaigns for living wage agreements, local hiring preferences and increased education funding for San Diego County workers and their families.

“Respect for working families means respect for their money. Unions negotiate wages and benefits but nothing happens until union members vote. I think that principle applies to taxpayers," she said.

“I’ve hammered out tough compromises between business and workers, between teachers and our school board, and between developers and environmentalists by putting practicality ahead of ideology.  That approach worked in San Diego County and it will work in Sacramento.  Extremism doesn't work. Pragmatic problem-solving does," Gonzalez said.

Gonzalez will seek election as early as this year if Assemblyman Hueso is elected to the State Senate in a special election this spring or as late as 2016 if he vacates the seat because of term limits.

Gonzalez has received endorsements from a variety of leaders representing the district, including Democrats, Republicans and independents:

The daughter of an immigrant farmworker and a nurse, Gonzalez learned the value of hard work and determination at an early age. After graduating from Vista High School in San Diego County, she earned a Bachelor’s Degree from Stanford University, a Master’s Degree from Georgetown University and a Law Degree from UCLA.

Prior to coming to the Labor Council, Gonzalez worked as the Senior Advisor to California’s Lieutenant Governor Cruz Bustamante. She served as a consultant to the Commission on Economic Development, and was the Lt. Governor’s principal advisor on policy issues dealing with labor, the environment, energy and infrastructure. She was also the Lt. Governor’s appointee to the California State Lands Commission from 2000 to 2006 and served as San Diego City Councilman Ben Hueso's alternate to the Coastal Commission in 2007 and 2008.

She serves on the boards of directors of the United Way of San Diego County, the California Labor Federation, the Center on Policy Initiatives and the Planning and Conservation League.

Nonetheless, Gonzalez says her most cherished title is that of mother. She lives in San Diego's Sherman Heights neighborhood with her two children – Tierra and Antonio.

For more information on her campaign, visit www.VoteLorena.com