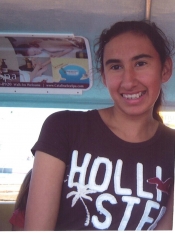 March 16, 2010 (El Cajon) 9:15 a.m.– Brenda Luu, a 19-year-old mentally impaired teen from Jamul, has just been found safely by El Cajon Police at a bus stop at Mollison and Main Streets in El Cajon after a citizen reported seeing the missing girl

At this time there is no evidence of foul play, though authorities have not yet fully questioned the girl who is being transported to the Lemon Grove Sheriff's substation, a Sheriff's official confirmed moments ago.

Yesterday morning at 9 a.m., Brenda Luu was dropped off at a school bus stop in Jamul by her sister at 14547 Hidden Wood Road. She never returned home after school, and authorities said it is unclear whether she made it to Valhalla High School in the morning.

The missing teen was considered at risk, Sheriff Bill Gore reported. She is Vietnamese/Hispanic, 4 feet 11 inches, 100 pounds with brown eyes and black hair. She was last seen wearing a blue blouse with blue flowers, blue jeans and black tennis shoes. Anyone with information about her  was asked to call the San Diego Sheriff's Department Communications Center at 858-565-5200.