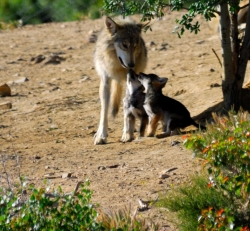 “The only wild Mexican wolves in the world are the approximately 40 in Arizona and New Mexico,” she said. The animals are considered the most endangered of all land animals in North America.
California Wolf Center has participated in a captive breeding program for the rare wolves, which were completely extinct in the wild in the 1950s. But efforts to reintroduce them into their native habitat in Arizona and New Mexico has been fraught with peril.

In an interview conducted last December for a story published by ECM in February, California Wolf Center manager Erin Hunt told ECM that there were 52 Mexican wolves in the wild. According to Defenders of Wildlife, more than 30 lobos have been killed by poachers in recent years; others have died from causes ranging from being hit by cars to shot by ranchers with predation permits due to livestock kills. Locally, one wolf was captured and returned to captivity to save it after it began preying on livestock.

The two animals found shot in the Big Lake area of the Apache Sitgreeves national Forest in Arizona included the pack’s alpha male and a female. Neither were raised at the Julian preserve, however Valentino expressed concern for the impact of such a loss on the pack, which had around eight wolves.

“There were pups,” Valentino disclosed. “Now it will be a challenge for them to survive.” The pups were born in early May and are only about two and a half months old, he said.

Asked whether the poaching deaths would restrict efforts to release more wolves, Sargent replied, “Just the opposite---to make up for these illegal killings and get the wolves back on the road to recovery, the Fish & Wildlife Service will release more wolves.”

Valentino confirmed that plans to release more wolves into the wild will continue, including plans to reintroduce the first captive-bred Mexican gray wolves into Mexico as early as September.

Last year, poachers who killed two Mexican wolves were arrested.  Penalties for poaching federally endangered species can range from substantial jail time to probation, depending on the circumstances.

“Killing Mexican wolves is a violation of the law,” said Benjamin Tuggle, the Service’s Southwest Regional Director. “Though these illegal kills have been an impediment to the successful reintroduction of the species, we will continue our efforts to recover wolves in the Southwest.”

Tuggle went on to say that all of the Service’s available regional law enforcement resources will be used to conduct a comprehensive investigation of this illegal shooting in collaboration with the Arizona Game and Fish Department and other partners.

Anyone with information that could be helpful in identifying the individual(s) involved in illegally shooting AM 1044 or any other Mexican wolf is urged to contact the Arizona Game and Fish Department’s Operation Game Thief at (800) 352-0700, or the U.S. Fish and Wildlife Service / Office of Law Enforcement at (928) 339-4232.

Defenders of Wildlife has launched a campaign to protect America's wolves. The site, www.savewolves.org, includes a petition calling on federal officials to increase enforcement efforts to protect the highly endangered Mexican wolves.  To sign the petition, click here.