January 31, 2011 – For the first time ever, the California State Lottery is teaming up with a casino to provide more winning opportunities for both Lottery players and Viejas Casino guests.

“We believe this agreement is the first of its kind in the nation between a state lottery and a casino,” Robert Scheid, public relations director at Viejas Casino & Outlets, announced at a press conference today in the Viejas Dreamcatcher Lounge.

“This partnership takes winning to a whole new level,” said California Lottery Spokesman Bill Ainsworth. “Viejas Casino is one of the best known names in gaming and entertainment in Southern California and we are proud and excited to partner with them.”

As part of the new MEGA Millions partnership, Viejas Casino will launch several new lottery-themed promotions throughout February, with more than 22,000 winners between February 1 and February 28. Additionally, all advertising and promotion has been created jointly, with each party lending its brand equity to the other.

“We are giving our customers more bang for the buck,” said Scheid. In addition, Lottery players will have more ways to win. The promotion is also a win-win for public schools, which receive funding from the Lottery, and for the community, which benefits from donations made by Viejas Casino, Scheid added. Viejas has in the past donated money for computers for public schools and firefighting resources in our region, also supporting the Viejas Wildfire & Emergency Alerts, to name a few examples.

With the new “MEGA 5 Bonus” promotion, each Lottery player who purchases at least $5 on a single MEGA Millions ticket at more than 1,600 participating retail locations in Southern California receives a chance for an online lottery “second chance drawing.” In addition, they will receive:

• A free V-card that can be swiped daily on the MEGA Machine Kiosk at Viejas for a chance to receive a free drawing ticket into Saturday’s $15,000 Mega Money drawings

• A chance at over 22,000 prizes in February from the MEGA Machine Kiosk, including $500 cash, an iPod Shuffle, and additional California Lottery tickets

• A second-chance drawing for $5,000 with the entry codes players submitted, giving players more than 30 days after the promotion ends to enter the drawing. The winner’s name will be posted on the Lottery and Viejas Casino’s websites by mid-April 2011.

Every Saturday in February, drawing finalists will go up on stage and select their prize from a jumbo-sized Scratchers card. Depending on how many matching symbols are revealed on their card, players can win up to $5,000. Drawings will be held at 8 p.m. every Saturday, and will be officiated by California Lottery $5 million winner, Natalie Marston.

“In the past, there was a competitive stance between tribes and the California Lottery,” Scheid observed. Agreeing to try their luck on the new partnership and hammer out details “took some open minds on both sides,” he said. Are there fundamental differences between Lottery players and people who play casino games? “We’re about to find out,” Scheid said.

Ainsworth says customers who purchase lottery tickets are not only helping public education. “You get a chance to dream,” he said, “and some people have their dreams come true.”

Viejas Casino General Manager David Williams added, “By partnering with the California Lottery, we are bringing together two of the best gaming brands in the state and leveraging the expertise and creativity of both organizations for the benefit of our customers. For lottery players and Viejas Casino guests it means adding instant value to their purchase and providing new, creative ways to win. We look forward to building upon our relationship with the Lottery and providing our guests with fresh, fun new promotions in 2011 and beyond.” 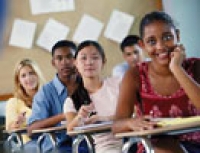 The California Lottery has contributed over $23 billion to California public schools and universities since its inception 25 years ago, including $1.7 billion for schools in San Diego County. The MEGA Millions lottery game pools money from players in 41 states; last month’s MEGA Millions reached $381 million; this week’s is $91 million. For more information on the California Lottery, visit www.calottery.com or call 1-800-LOTTERY.

Viejas Casino, located at I-8 and Willows Road in Alpine across the street from the Viejas Outlet Center, has been voted San Diego’s “Best Casino” for 11 years in a row. Viejas revenues help improve life for people both on and off the reservation, including $2 million a year in community donations, such as $60,000 donated for Alpine Schools last year. For more information on Viejas, visit www.viejas.com or call 1-800-847-6537.