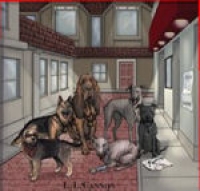 New book, For the Love of Dog Tales, gives advice on how to choose your new best friend from an animal shelter
March 27, 2012 (U.S.) -- Among the biggest victims of the economic recession are the once beloved family pets surrendered to shelters as their owners deal with extended joblessness. The U.S. Humane Society estimates 6 to 8 million dogs and cats enter shelters each year – and 3 to 4 million are euthanized.

“We don’t have firm numbers but we know anecdotally that the communities that have been hardest hit by the economic downturn are seeing that reflected in their shelter intake numbers,” says Inga Fricke, director of sheltering issues for the U.S. Humane Society.

“And, unfortunately, while the majority of the public is in favor of adopting pets from shelters, very few – usually about 20 percent – actually do. That has recently gone up slightly to the mid-20s.”

), gives voice to man’s best friend, hope people getting back on their feet will consider adopting a shelter dog, perhaps in observance of Prevention of Cruelty to Animals Month in April.

“You won’t find a better companion, whether you bring home a mystery mixed-breed or a purebred Labrador,” he says. “Everyone thinks mutts are smarter and generally healthier, but really, it all depends on their mix of breeds and which breed strain is dominant.”

Border collies and Rottweilers are two of the smartest breeds, Cannon says. But they tend to have other traits, too, which are just as important to consider when choosing what dog best suits your lifestyle. Remember – dogs are as individual as people. A dog’s breed, or breed mix, is no guarantee that it will have certain traits.

That said, border collies tend to need lots of room to run and lots of attention – they’re high-maintenance, Cannon says. If you can’t spend a lot of active time with them, they’ll be unhappy and you’ll have problems.

Rottweilers are fast learners and loveable family animals, but they also tend to have bold personalities associated with pack leaders. If you don’t think you can assert your authority, or if you have young or shy children, you might want to consider a more submissive breed. Dominant dogs that are allowed to bully their family members can become dangerously aggressive.

Here are some other tidbits regarding breeds:
• Among other dog breeds known for intelligence: Shetland sheepdogs, golden retrievers, Labrador retrievers, poodles, Australian cattle dogs, Papillons and Doberman pinschers.
• Bulldogs, beagles and Basset hounds all start with ‘B’ but get much lower grades for smarts.
• It’s a myth that mutts have fewer health issues than purebred dogs. Because some breeds have tendencies toward problems such as deafness, blindness or hip dysplasia, remember, these are genetic issues that are inherited. So if you’re mixed-breed includes some German shepherd, it may also have hip dysplasia (a problem with the joint’s bone structure).
• If you’re in the market for a purebred dog, you have a 25 percent chance of finding one – although maybe not the breed you want – at a shelter. If your heart is set on a specific breed, check your area for a rescue group specializing in that breed.
Don’t forget to mark your calendar for Prevention of Animal Cruelty Month, which recognizes the 1866 charter signing of the American Society for the Prevention of Cruelty to Animals.
Visit http://www.aspca.org/fight-animal-cruelty/ for 10 ways you can help prevent cruelty to animals.
About Irvin Cannon

Irvin Cannon was a poor kid growing up in Detroit when his family took in a stray dog. It surprised young Irvin that his father would be willing to share the family’s meager groceries with a dog, but he soon discovered the return on their investment was enormous. A former police officer in Detroit and Denver, he also worked as a corrections officer in Arizona.

The idea of Rescue of animals form the shelter is great, I think it will help to safe the life of the animals, and this deed will be great.

I think that there is nothing better than being able to rescue an animal from the shelter. There is no need to get a brand new puppy when there are so many amazing dogs waiting for new homes.