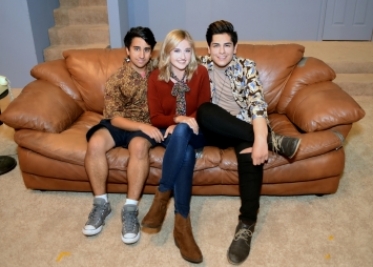 October  12, 2017 - (El Cajon) - Love. Sex, and the I.R.S. are topics we all think about a lot--however, most likely not laugh at. This play reminded me of a long episode of the television show "Love American Style," an early ‘70s show. It’s ridiculous and funny.

I was surprised when I read director Brian Rickle's notes to find he actually used situation comedies from the ‘70s as inspiration. He nailed it!

The set up is a bachelor's apartment in New York City in 1983. One roommate is cheating on another with the woman he is going to marry in two weeks. The cheaters are looking for a way to tell him. Enter the cheated upon, who tells them in order to save money, he told the I.R.S. his roommate, Leslie, was his wife. Now the I.R.S. is paying them a visit. Let the fun issue.  The play is kind of a farce, with lots of misunderstandings, comings, and goings.

Opening night fell a little short of filling the seats. If you want to laugh at some silly old school television-like comedy (and who doesn't love those old shows?)  make some time to support the Arts.

Exciting news for Grossmont College:  they will break ground on October 27th on a new performing arts complex, with a 300 seat theatre.

Coming up next: American Classic, Bus Stop by William Inge