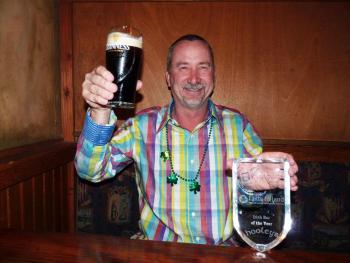 We caught up with MacDonald during a 15th anniversary party at Hooleys, where  he proudly showed his award--then told us how he learned of this fine honor.

Last October, he attended the Irish Clubs Convention in Dublin.  Each year, the group chooses a best national pub in Ireland and also selects a best international pub  from “hundreds and hundreds” all over the world, MacDonald explains.

“I was at the Guiness Brewery in the back, having a pint,” he recalls.  “I didn’t even know  we were nominated. Then they anno 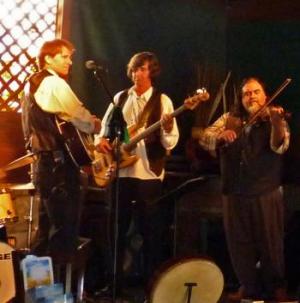 unced we had won –and I had to go running up there, totally unprepared.”  The greatest thing about the honor, he says, is that it was selected from aomong his peers—but he still doesn’t know who nominated Hooleys.

“When I got back in San Diego, I was  calling all my fellow Irish pub owners asking, `Did you nominate us?’

The honor, however, seems richly deserved.  MacDonald had long dreamed of owning a pub—so he brought back old wooden beams, pews, and a brass whiskey still from the old country, including salvaged parts from Irish pubs and an Irish church to create an establishment that is steeped in ambience as well as friendly service , live Irish music and a hearty array of Irish fare , from Hooley’s now-famous corned beef tacos to Irish stew to Guiness brew and an array of other beers on tap.

Hooley’s opened the doors on St. Patrick’s Day, 1999.  A few years later opened a second Hooleys in La Mesa’s Grossmont Center. Since then, the annual Hooley Fest held each St. Patrick’s Day has become  one of East County’s most popular festivities.

The name Hooley’s connotes celebration -- reputedly named for a  Hindu festival brought back by Irish soldiers.  But it’s also a warm and welcoming place for all.

“This is the quintessential Irish pub,” muses MacDonald. “Single women can come in and feel comfortable, but so can a family.” 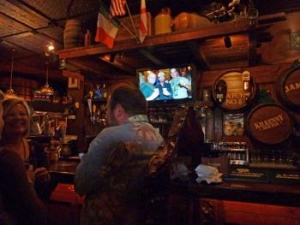 A loyal customer, Donald Buckles, chimes in.  “I enjoy the bar…You’re friends with everybody. It’s the nicest place you will ever be,” he says in a testimonial that sounds much like Cheers of TV fame, “and it all started with Craiggers here!”

MacDonald reflects back on a landmark event in Hooley’s history.  “I’ll never forget the Cedar Fire.  We just opened our doors  to everyone. We weren’t selling anything.”

The shopping center where Hooley’s is located in Rancho San Diego became an evacuation haven for displaced area residents, many with motorhomes, pets, and horses housed in a makeshift corral behind Hooley’s.

“[Supervisor] Dianne Jacob held a press conference here,” MacDonald recalls.  “Arnold flew in,” he said of former Governor Schwarzenegger.  “ We were like the wayward home for people. We were filling water for 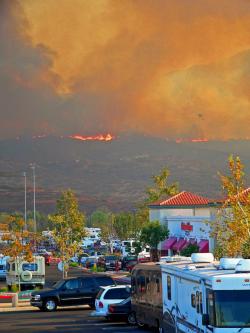 motorhomes,  and for the horses.”

As the wildfire encroached, firefighters lit a backfire on the hillside behind Hooley’s, saving the center from burning.   MacDonald recalls the rest of the shopping center was closed, but Hooley’s stayed open. “We had all the firefighters here, so we said the fire line will stop here,” MacDonald recalls.

What’s next on tap for Hooleys?

“In two weeks, I fly to Dublin,” MacDonald revealed.  “I’ll be joining a group of pub owners going to Hungary.”  There, he’ll be taking a microbrewery course – and just may decide to start brewing up his own craft beer to sell at Hooleys – or someday, maybe even distilling a bit of Hooleys whiskey.

But the proprietor of the newly proclaimed finest Irish pub outside of Ireland vowed, “If I do something, I’ll want to do it really well.” 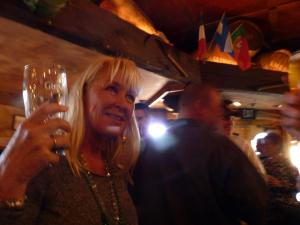 Cheers! Or as they say in Ireland, "Slainte!"