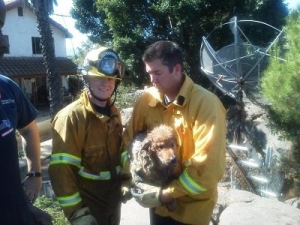 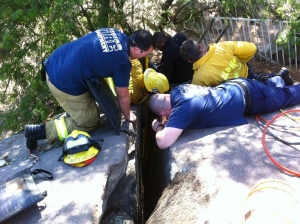 September 22, 2011 (Alpine) – A dog that fell and became wedged inside a rocky, 15-foot deep crevasse in the 2600 block of Big Wheel Way is free and in good health, thanks to the extraordinary efforts of Alpine firefighters.

Alpine Fire’s Engine 17 “B” division responded after a caller reporter that neither Animal Rescue nor County Animal Control would help. They found the dog wedged at the bottom of the split boulder, which measured 30 feet in diameter and 15 feet tall. 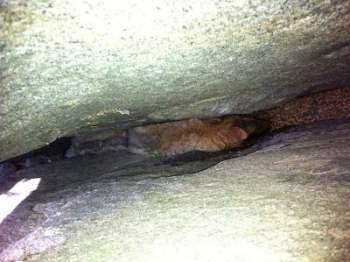 “Crews assessed the situation and attempted to free the dog using the Jaws of Life to create a space for the dog to free itself,” Captain Brian Boggeln said, according to a story posted at the Alpine Community Forum. “After repeated attempts, the boulder would not move."

Next, a ladder truck from Viejas Fire Department responded with rescue air bags and attempts were made to create another space to free the dog, but this attempt was also unsuccessful.

Finally, crews managed to use poles and ropes to lasso the hind legs of the dog. Using vegetable oil for lubrication, they were able to free the animal and pull it out from the crevasse. See video: http://www.facebook.com/photo.php?v=2217652412429