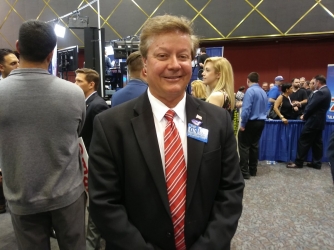 June 5, 2016 (San Diego's East County) -- Incumbent County Board of Education member Alicia Munoz has fended off a challenge by East County Chamber of Commerce president and community college instructor Eric Lund.  Munoz, who had heavy backing from the American Federation of Teachers, has 57.46% of the vote over Lund's 42.34%, with 20% of precincts reported.

"It's been a good learning experience. This is my first time running and I'll be more prepared next time," Lund told East County Magazine.

The race was characterized by attack mailers on both sides. Mailers from the Munoz campaign assailed Lund for his backing from the California Charter Schools Association and claimed he was untrustworthy, among other allegations. Lund's mailers contended that Munoz was in the pocket of "union bosses."  Although the race is officially nonpartisan, Munoz was endorsed by the Democratic Party and Lund by the Republican Party.

From the looks of the numbers, I think that last figure should have been .02% or lower

With results from early absentees and election day voters (excluding provisional, which may take time to count, and mail ballots dropped off Tuesday at polling locations, expected Thursday 6/7 after signatures are verified) from all 364 precincts reporting, ALICIA MUNOZ has 36,626 votes (56.73%) to ERIC J. LUND's 27,807 votes (43.07%), and 132 Mickey Mouses or Donald Ducks (.2%).