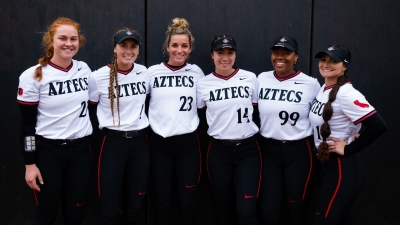 Balint throws SDSU’s first no-hitter in 15 years
Source:  goaztecs.com
Photo courtesy goaztecs.com
May 6, 2022 (San Diego) - Maggie Balint struck out 12 batters in a complete-game no-hitter to lead San Diego State to a 4-0 victory over Utah State in the series opener Friday night at SDSU Softball Stadium. It was Balint’s (16-5) first career no-hitter and the Aztecs’ (34-12, 17-2 MW) first since Christina Ross tossed a five-inning perfect game in an 8-0 SDSU win over Brown on March 28, 2007.

The Aggies’ (25-25, 10-9 MW) only baserunner came in the top of the fourth inning when Mazie Macfarlane reached on an Aztec fielding error.

Balint, who was named the Mountain West Pitcher of the Week for the eighth time in 12 tries on Tuesday, struck out two batters in the first, one in the second, all three she faced in the third, one in the fifth, three again in the sixth and two in the seventh. Out of her 12 strikeouts, 10 were swinging and two were looking.

SDSU got all the runs it would need in the bottom of the fourth. Jillian Celis first drove in Audrey Kull with a single to center field. Alexa Schultz followed with a three-run home run just inside the left foul pole.

San Diego State loaded the bases in the fifth on a Nicole Siess walk, Bella Espinoza single and Taylor Adams walk, but with one out Danielle Romanello grounded into an inning-ending double play.

AJ Murphy had two of the Aztecs’ seven hits in the game, while Adams was 1-for-1 with two walks. Mac Barbara singled in the first to stretch her NCAA-best consecutive reached base safely streak to 40 games.

RHP Maggie Balint recorded her 13th double-digit strikeout game out of her 24 starts.

1B Taylor Adams has reached base safely in 13 of her last 15 plate appearances dating back to an April 20 game at UC San Diego. Over that span she has eight hits and five walks.

The Aztecs will look to clinch the series with Utah State at 4 p.m. on Saturday.