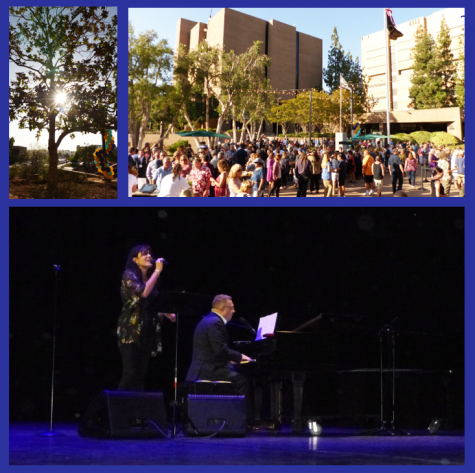 September 11, 2019 (El Cajon) – Community members from across the region flocked to the grand opening of The Magnolia performing arts center in downtown El Cajon yesterday.  More than $8 million has been spent remodeling the former East County Performing Arts Center, which had been closed for a decade but has now blossomed anew.

As the setting sun sent a starburst shining through a newly planted magnolia tree out front, visitors inside saw renovations including a new VIP viewing area, multiple bars serving up food and beverages including cocktails, backstage dressing rooms,  a shimmering new gold curtain and more. 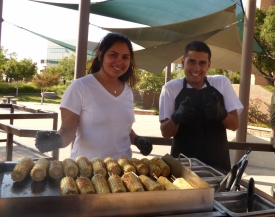 Live Nation offered tours to the public, along with free foods from local vendors ranging from tamales to grilled corn, as well as chances to spin a wheel and win prizes including tickets to upcoming concerts. The company has hired 100 staffers including 89 El Cajon residents.

A new gold curtain rose on entertainment that included a professional pianist as well as a duet of “Hallelujah” performing by local vocalist Stephanie Noriega and El Cajon’s Mayor Bill Wells playing piano as well as singing backup. View an excerpt: https://youtu.be/Tvt3HIKT65o

Mayor Wells liked seeing the restored Magnolia center to rediscovering an old friend “all grown up.”  He said the Magnolia is now “the best it’s ever been,” adding, “The chess piece that made it all work was Live Nation coming on and working with us.”

Councilman Phil Ortiz recalled his brother getting his start in the performing arts on the Magnolia’s stage; he now performs on Broadway, the new Councilmember said.  Councilman Bob McClellan recalled early doubts about whether the theater should be saved due to the high cost of renovations needed, but voiced gratitude to see it finally reopened.  Councilman Steve Goble was also present, thanking all involved. 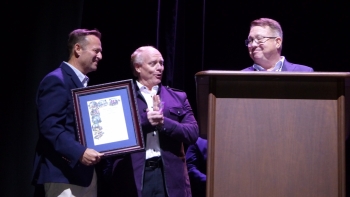 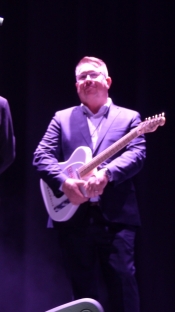 Live Nation then presented the city with a guitar, striking a harmonious chord for the future.

The restored performing arts center, long known as a jewel in our region for its excellent acoustics, will be available for rentals on dates when Live Nation is not utilizing the facility, including outdoor patio space, the theater itself and the new VIP lounge.

Further show details and tickets are available at: www.magnoliasandiego.com