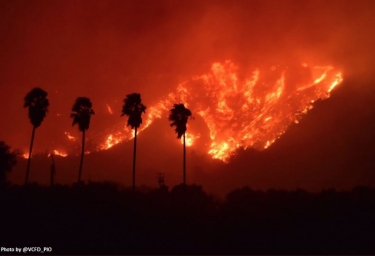 December 5, 2017 (San Diego) – At least 150 families have lost their homes just weeks before the holidays, due to fast moving brush fires fueled by Santa Winds across southern California.

In San Bernadino County, the Meyers Fire forced shut down of Highway 15 and Highway 215 though most lanes are now reopened.  It charred 35 acres and is 50% contained.

In Riverside County, the Riverdale Fire burned 40 acres and is 50% contained.

One person died in today’s fires and three others were hospitalized with burns.

If you  are traveling check for road closures; earlier today I-5 was closed at the Grapevine and many other major roadways were also impacted. A red flag warning remains in effect for the next couple of days so the potential for more explosive fire growth remains across Southern California.

Locally, one small fire erupted in Jamul on Lyons Valley Road, caused by a lost hiker lighting a flare, but fortunately fire crews held the fire to a half acre.