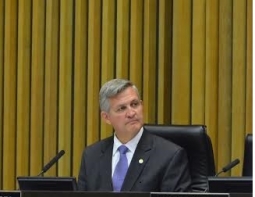 In a prepared statement, Supervisors indicated they determined the settlement to be “in the best interest of taxpayers” and said Roberts “at a minimum, showed poor judgment.” The statement added that “although not conclusive, the investigative material surrounding the inappropriate use of County funds, promoting a hostile work environment, an alleged bribe, campaigning on County time, improper use of a County vehicle and retaliation against District 3 staff members is significant and a matter of concern for the Board of Supervisors.”

Asked his response, Roberts, who has consistently denied the staffers' allegations, provided East County Magazine with the following statement:

“When my Chief of Staff retired after 22 years in that position, the transition to a new Chief did not go as well as I expected and I take full responsibility for that.  Now that the settlement has taken place, we are moving forward,” Roberts said. “While I strongly oppose the action taken today by a majority of the Board of Supervisors, I respect my colleagues' right to make such a decision.  I have said consistently that no taxpayer funds should be used to resolve these issues."

He added, "It is unfortunate that they occurred, but they are now behind us.  My staff and I will continue to work hard delivering results for the people of the Third District as I have strived to do since my first day in office.”

The statement issued by the majority of Supervisors went on to cite detailed reasons for the decision to settle:

Inconsistent statements made by Supervisor Dave Roberts during the investigation, in closed session and in media interviews have made the investigation difficult and certainly challenges his credibility as a witness during a potential trial. Although Supervisor Dave Roberts admitted to mistakes in judgment at the onset of the allegations and implied his willingness to settle allegations with these former staff members without using County funds, he has since reversed his statements. He now states that he has done nothing wrong. Emails, text messages and other documentation that have surfaced over the last several months appear to contradict his most recent position. The Board previously rejected severance payments to two of the three former staff members based on Supervisor Dave Roberts commitment to settle the matter without County funds.

Subsequently, the three former staff members all filed claims against the County and were ultimately seeking a total of $1.075 million in compensation. If lawsuits were to be filed by the three former staff members and Supervisor Dave Roberts is named as a defendant, the County would be required to retain outside counsel for him at County expense. According to County Counsel, the litigation cost to defend Supervisor Dave Roberts through trial in the three cases, win or lose, could exceed $1 million. In addition, we believe it is unlikely we would prevail on all three claims.

Analysis of documented evidence indicates that former employee Diane Porter participated in activities in her role in Supervisor Dave Roberts’ office that violated County policy. Whether she did so knowingly or not is uncertain. However, she was doing so with the full knowledge of Supervisor Dave Roberts and arguably at his direction.

Lindsey Masukawa had a positive two year working relationship with Supervisor Dave Roberts. She is a credible witness who made it clear to multiple County employees that she was resigning due to inappropriate pressure from the Supervisor to influence the investigation, but sent a positive resignation letter to him out of fear of retaliation and detriment to her professional career.

The Board of Supervisors’ decision to settle the claims is not intended as statement that we believe all the claims by the three former staff members are true. But, we do believe there is substantial risk that a jury would find elements of several of the claims valid and would render an adverse verdict at trial. To minimize the significant financial exposure to County taxpayers, the Board considers it‘s in the best interest of taxpayers to settle the claims immediately.

At the direction of the Board of Supervisors, more detailed information has been compiled and is available.

The San Diego Union-Tribune has examined documents provided by the County and has additional details here:

...how the San Diego Democratic mayor causes the payment of tax dollars for misbehavior and the same is true of the only Democrat on the BOS.