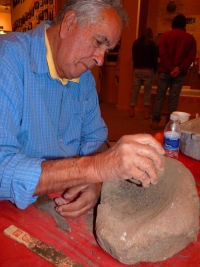 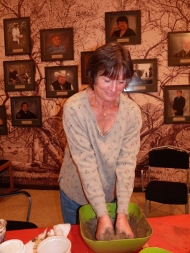 Students ranged from amateurs to professional artists—and all rolled up their sleeves to gain hands-on experience in pottery making.

Barbara DeYoung (photo, right) of Lakeside poured water into a tubful of finely ground clay and kneaded it with her hands, an experience she described as “playing like you’re a kid in the mud. This is the first time I’ve tried it, and I found it to be quite fun!” 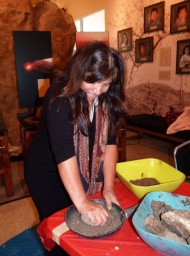 Another student, Sylvia Mejia (photo, left), is an artist and sculptor who has a studio in Balboa Park’s Spanish Village.

“Robert is a really great influence,” she said of Freeman, an accomplished artist who has won over 200 awards for his works. “I think he’s a valuable person in this community.”

Born on the Rincon Native American reservation in 1939, Freeman is of Luiseño and Hunkpapa Sioux heritage. He grew up in California, spending summers at the Crow Creek reservation in South Dakota. His works have been displayed in museums and exhibitions around the world. He continues to create art at his studio on the Rincon reservation in Escondido. View his works at his website, http://www.robertfreemanartist.com.

Working in a variety of mediums and styles ranging from oil paintings to bronze sculptures, Freeman has also gained prominence as a public artist. He created a life-sized cougar sculpture for Cal State University San Marcos and painted murals on walls of the Los Angeles County Library at San Gabriel, as well as the Perris Indian Museum. His bronze sculpture of a Native American woman graces San Juan Capistrano. In 2002, he was commissioned by the State of California to create a commemorative seal which is now embedded on the Capitol steps in Sacramento.

His interest in clay pottery began in 1977, when he was an instructor at Palomar College in San Marcos. “I met a guy who was teaching at an elementary school in Rancho Bernardo,” he recalled. “He had kids digging native clay at a public school. He told me where to find some clay, and I started a pottery class at Pala.” 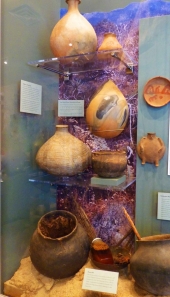 Over the past 20 years or so, he has taught the class at a variety of schools, Indian reservations, and private institutions. To Freeman, the class is about more than just learning how to create pots similar to those used in ancient times for cooking or to carry water. (photo, right: museum exhibit of traditional pottery.)

“It’s so people can better understand in history how things were done. They took time. I want them to appreciate old pottery more….and to understand that you can take time and make things.” He noted how technology has changed society, so that people have little time for relaxation anymore.

“I don’t have a wristwatch. I don’t have a cell phone. An artist’s life is solitary,” he said, adding that he enjoys the social time with his students. 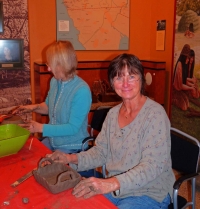 The students enjoy it, too.

“We sit down and visit and get to know each other, like people did in the old days,” DeYoung observed.

“This is a great way to chill and relax on a Saturday,” said Lollo Enstad, a San Diego woman of Swedish descent (photo, left, with DeYoung). “We took a break earlier; everybody sat down and started telling stories. It’s all part of this culture.”

She started her clay pot with a ball of clay, inserting thumbs and turning it to create a depression inside. “It started to crack; I was pulling outwards, but I need to keep pushing in,” she said, banging the clay on a table to illustrate. Nearby, another student smooths her vase with a wooden stick, while a third forms handles on a basket-like clay creation. (photo, right: students' clay pots)

Freeman laments the fact that modern-day area residents are more apt to buy pots in Wal-Mart than to take time to make their own. “The Chinese put everybody out of business,” he said. 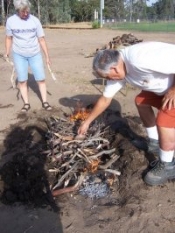 In three weeks, his students will fire their clay creations in a pit fire (photo, right). “We will dig a hole in the ground, a trench, and burn a fire with oak twigs,” he explained. The process takes about 45 minutes, he added.

In keeping with primitive traditions, the pots will not be glazed or painted. Once fired, they will be watertight, suitable for cooking, holding water, or simply displaying in students’ homes.

“I will definitely be back,” Enstad concluded, smiling.

The pottery class is one of several offered at the Barona Cultural Center and Museum, which features displays showcasing the history and culture of the Barona Band of Mission Indians as well as other Native American tribes in the California and Baja regions.

Upcoming classes include willow basket making (March 20), a course on preserving heirloom photos May 15), and a yucca class that teaches students how to make fiber for nets as well as taste traditional foods made from the yucca plant (April 17).

Admission to the museum is free; classes cost $20. For details and information, see www.baronamuseum.org.