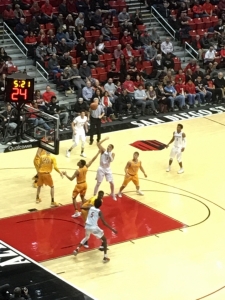 February 15, 2018 (San Diego) - It may be Valentine’s Day, but it felt more like this year’s V-Day competition, Ash Wednesday, inside Viejas Arena as two Mountain West rivals squared off in men’s basketball.  The Aztecs greeted the Cowboys of Wyoming, who rank third in the Mountain West. 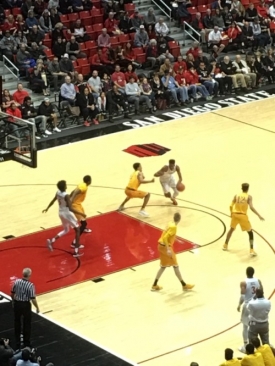 Senior Malik Pope set the tone early with some easy buckets, making the third-place team look like they were in last and giving the Aztecs a 6-0 run.  Wyoming fought back, but good blocking at the defensive end allowed the Aztecs to stay in control.  After a timeout, Wyoming answered big with a game-tying three from senior Alan Herndon, but Jeremy Hemsley shut the door on him.  The junior drained a three at the other end to give the Aztecs the lead again.  The refs finally let both teams play, which may not have been good for the Aztecs, because they ran into heavy foul trouble, quickly racking up five team fouls, but despite this and aggressive drives to the hoop by Wyoming junior Justin James, who posted 11 first half points, junior Devin Watson and redshirt freshman Jalen McDaniels broke the game open with a three and a two.  Freshman Jordan Schakel broke it wide open with two threes and McDaniels added two free throws to give SDSU their first double digit lead of the game.  The Aztecs went to the locker room with a comfy 53-31 lead, including a buzzer-beating hat trick three from Schakel.  Watson had 11 points and sophomore Nolan Narain had 10.

Narain and Watson continued their dominance into the second half.  Schakel kept raining threes.  Even with everything (foul trouble) and everyone (James posting a game-high 26 points), Narain was persistent and put up 18 points, Pope reached 1,000 points as an Aztec and SDSU cruised to an 87-77 win. 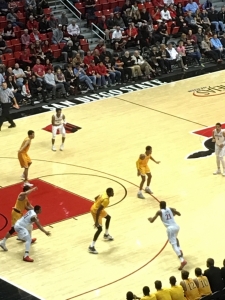 The Aztecs will stay home for a rare matinee against UNLV on Saturday.  Tipoff is at 1:00 p.m.