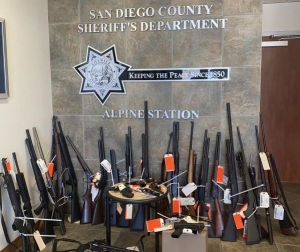 After getting shot at, Sheriffs obtain a search warrant and allegedly find guns, drugs and flammables

July 12, 2021 (Unincorporated San Diego County) -- A man is facing numerous drug and weapons charges after firing a shotgun in the direction of Sheriff's Deputies in the East County.
It happened on Sunday, July 11 just before 6:30 a.m. near Valle De Paz Road in an unincorporated area of El Cajon.  Deputies from the Alpine Sheriff's Substation were responding to calls of a man acting erratically and holding a rifle.  After setting up a perimeter around an area where the man was last seen, a shotgun blast was fired in the deputies' direction.  The shotgun slug hit a nearby home.  No deputies or citizens were hurt.

58-year-old Rodney Luzaich was arrested on charges of assault on a peace officer, negligent discharge of a firearm and being under the influence of a controlled substance while armed.  Deputies found the shotgun Luzaich used hidden inside a large cactus.  He was also found in possession of shotgun ammunition. 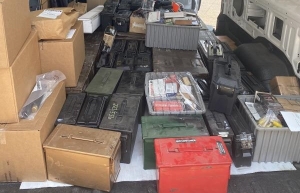 After a search warrant was obtained for Luzaich's home, deputies found 32 additional firearms and about 50,000 rounds of ammunition.
A Butane Honey Oil (BHO) lab was also located on the property.  Honey Oil labs are dangerous because the process involves extracting concentrated THC from marijuana using butane, a flammable odorless gas. Those vapors can be ignited even with static electricity, triggering an instant explosion.
Detectives also seized 29 marijuana plants, 98 pounds of marijuana, four pounds of marijuana wax, as well as methamphetamine, from the home.
The case remains under investigation.
If you have any information please contact the Alpine Sheriff's Substation at (619) 659-2600.

unless you want to be in jail for the rest of your life, you pretty much can only have one or the other. sorry dude.