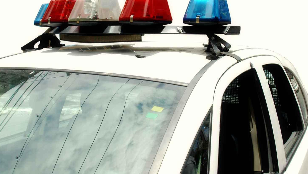 A Sheriff’s K-9 dog was stabbed in the head and face by the suspect.  Deputies used shotgun rounds, pepper balls and a Taser to take Lechuga into custody without lethal force, says Lieutenant Joel Stranger.

Deputies were treated by the fire department on scene for their exposure to the bear spray. The canine was taken to a local vet for treatment of non-life threatening injuries. Lechuga was transported to the hospital for treatment of injuries sustained during his arrest.
Lechuga was arrested for charges including felony assault with a deadly weapon on a peace officer, assaulting a police animal, and resisting arrest.
The handgun was later determined to be a pellet gun.
The investigation of this incident is ongoing. Please call Crime Stoppers at (888) 580-8477 with information and you will remain anonymous. You may be eligible for up to a $1,000 reward for information leading to a felony arrest.