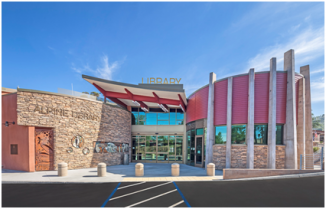 October 15, 2017 (Alpine) – Jack Wadel, 60, was arrested yesterday after the Alpine Sheriff’s department received calls that the suspect “reportedly was threatening to shoot people in the crowded library, and was pointing a toy gun at people,” says Sergeant Alex Navarro with the Sheriff’s department.

Another caller reported hearing shots fired, which are believed to have been from an air gun.  The suspect also threatened to grab a second handgun from inside his backpack, so a citizen grabbed the suspect to try and protect those present. The citizen sustained a small near his eye in the scuffle, but declined treatment.

The suspect fled. Deputies set up a perimeter and were searching the area when a witness at Manana’s Mexican Restaurant told deputies the suspect was behind the restaurant. He was found hiding under boxes and arrested.

Wadel was found in possession of two black imitation handguns.

He was arrested for assault with a deadly weapon, criminal threats, displaying of a firearm and battery. Wadel was booked into the San Diego Central Jail.