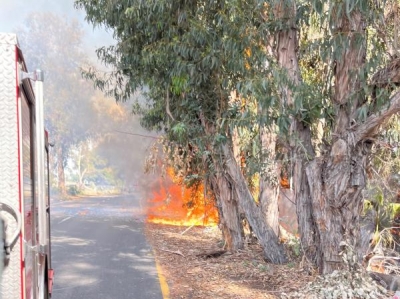 May 2, 2022 (Vista) - A man has been arrested on suspicion of setting several fires in the North County, says Sergeant Anthony Portillo with the Sheriff’s bomb arson unit.

This morning just before 8:30 a.m., deputies from the Vista Sheriff's Station responded to a report of a brush fire near the intersection of Melrose Drive and Oceanside Boulevard in the City of Vista.

Deputies detained 22-year-old Rogelio Ramirez near the fire scene.  The Sheriff's Bomb/Arson Unit responded to investigate.  Detectives arrested Ramirez for setting the fire earlier today as well as a series of arson fires set on April 28 in Vista and Oceanside.  To read our previous news release, click here.

The fires believed to be set by Ramirez were vegetation fires.  Thankfully, fire personnel were able to quickly extinguish the fires before anybody was injured.

Ramirez was booked into the Vista Detention Facility for six counts of 451 PC – Arson.

The investigation is ongoing.  Anyone with information about these incidents is urged to call the San Diego County Sheriff's Department's non-emergency line at (858) 565-5200.