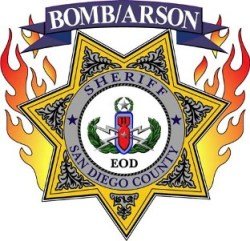 Sheriff’s Bomb and Arson investigators shut down the Spearhead Trail area for two hours yesterday afternoon to assure that it was safe.

Versteegh blamed SDG&E for damaging an earthen wall on his property that protects against flooding when the utility installed a metal post. He claimed the company did not respond to his complaints and said he planned to bury a land mine near SDG&E trucks, NBC TV in San Diego reports.

No explosives were found in a search of his property and the vicinity. County records list his property at 10161 Circle R Drive in Valley Center.

Veersteegh is charged with making a bomb threat and has booked into the Vistas Jail.