April 26, 2013 (La Mesa)—Jackson Pavlicek of La Mesa is under arrest for reckless burning of property.  According to La Mesa Police, Pavlicek extinguished a cigarette in the backyard of a home in the 9600 block Dillon Drive on the Grossmont Knoll, igniting dry brush.  The fire quickly spread to the house and also damaged the roof of a neighboring home, as well as trees and fences.

Heartland Fire & Rescue crews from La Mesa, Lemon Grove and El Cajon, as well as units from Santee, San Diego and Cal Fire, had the fire fully contained in about one hour. The blaze sent smoke billowing forth that was visible from State Route 125.

Police responded at 3:15 p.m. to assist firefighters with traffic control and evacuation of residents. No one was injured, but three residents were displaced and are being assisted by the Red Cross. 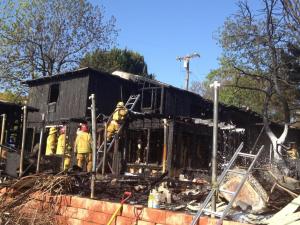 the fire was contained, LMPD Arson Investigators Sgt. Michael Pierce and Officer Michael Butcher conducted an investigation into the cause with assistance of fire personnel. The suspect was booked into San Diego County Jail.

The investigation is continuing. Anyone with information is urged to call the La Mesa Police Department at (619) 667-1400.