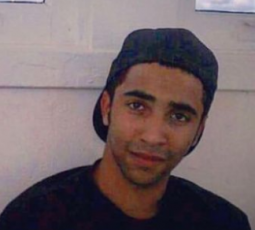 By Miriam Raftery
May 14, 2021 (La Mesa) – A federal jury in San Diego has convicted Zachary Alexander Karas, 28, of possessing incendiary devices including Molotov cocktail explosives during the riot in La Mesa following a May 30 racial justice protest. His sentencing is scheduled for August 13; the San Diego resident could face up to 10 years in prison and a $250,000 fine.
A timeline released by La Mesa Police Dept. indicated that Molotov cocktails were thrown at the La Mesa Police Station during a protest there earlier in the evening.  Several vehicles were burned including a Heartland Fire battalion chief’s vehicle and pickup truck and a Vons truck. Spot fires were ignited in several structures including City Hall.  Three buildings burned to the ground: Chase Bank, Union Bank, and the Randall Lamb historic building.
According to the complaint filed by U.S Assistant Attorney Andrew Haden, Karas and his girlfriend were sitting on the pavement at the corner of Allison Ave. and Spring St. in front of the trolley tracks around 2 a.m. on May 31, with several buildings in flames nearby. Officers ordered the crowd to disperse for an unlawful assembly and arrested Karas after he failed to leave. After his arrest, officers discovered that Karas possessed Molotov cocktails --two glass bottles with wicks that contained gasoline. Molotov cocktails are also known as bottle bombs or poor man’s grenades. Karas also had fireworks in his possession.
A special agent with the ATF inspected the Molotov cocktails and found them to be functioning incendiary devices.
Karas’ girlfriend posted a GoFundMe page for his legal defense, claiming he was there as a “peaceful protester.”  GoFundMe later took the site down.
According to his Facebook page, Karas graduated from Point Loma High School in 2010 and previously lived in Framingham, Massachusetts.
On his Facebook page, Karas posted after his arrest, “I literally f**ed my whole life up in less than 24 hours."  He claimed that  despite being caught with flammable devices he was "in no way a part of the burning of any structures and was not involved in any looting.”
According to prosecutors, in an interview with law enforcement, Karas claimed he made the Molotov cocktails and brought them to the area near the police station “because he intended to set fires,” but also claimed that he “changed his mind and was not responsible for any of the fires that were set that night.”
“The Constitution strongly protects the First Amendment right of all to speak out and peacefully protest,” said Robert Brewer, the U.S Attorney at the time of Karas’ arrest. “My office is committed to protecting that First Amendment right. Violence, however, by a relatively small number of opportunists who sought to wreak havoc, destroy property, and threaten the safety of peaceful protestors will not be tolerated.”
This Karas case is the result of the ongoing efforts of the Violent Crime and Human Trafficking (VCHT) Section.  Formed in 2019, by U.S. Attorney Robert S. Brewer, Jr., the VCHT is tasked with leading collaborations between federal and local law enforcement in the investigation and prosecution of certain cases including those involving violent crimes, firearms and gang activities.