Update 6 p.m.:  This dispute ended peacefully with no injuries following  a four-hour standoff.  The man, Stephen Gainder, 45, surrendered to deputies and was taken to Pomerado Hospital for evaluation.  Pomerado News reports that a neighbor called the Sheriff following a loud dispute between Gainder and his elderly mother. After deputies attempted to subdue him with a taser and beanbags, he armed himself with a crossbow. 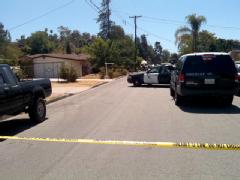 September 14, 2010 (Poway) 12:56 p.m. -- Negotiators from the San Diego Sheriff’s office are attempting to talk a man armed with a crossbow into surrendering. According to ECM news partner 10 News, deputies performing a welfare check in the 14000 block of Tobiasson Road were told by the man that he is armed with a crossbow and refusing to come out.

The street is blocked off and Abraxus High School nearby is in lockdown status. Neighbors are asked to stay indoors until the impasse is resolved.

No further details are available at this time.