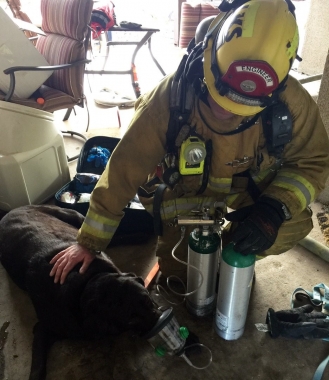 January 1, 2017 (Lakeside) – A man found in a burned home this morning on Woodland Vista in Lakeside has died. Firefighters from the Lakeside Fire Department rescued and revived a Labrador retriever dog, using a special pet oxygen mask.

“There are no outstanding suspects and the fire appears intentional,” says Sergeant Greg Hampton with the Sheriff’s Department.

Deputies responded to the blaze around 7:55 a.m. this New Year’s day and extinguished the fire that engulfed the living room and extended into the attic.

The victim, who was the only human occupant in the home, was transported to UCSD Medical Center’s burn unit, where he later died.

An investigation is continuing. The cause and manner of death will be determined by an autopsy.