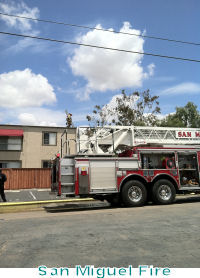 December 2, 2011 (Spring Valley) -- San Miguel Firefighters responded to fully involved structure fire on the 2900 Block of Vista Drive, in Spring Valley. The fire started somewhere inside a detached garage with a large apartment style room above. According to the male property owner, his brother lived in the room above the garage.  Soon after the fire, as they searched the residence a body was found.
Several yards from the garage is the properties primary dwelling. A husband and wife occupy the single family home. No damage was done to the single family home. The fire was reported at 6:29 pm, and was considered knocked down 70 minutes later. The flames were so intense Firefighters had to move into a defensive mode to protect the primary home and neighboring structures. No other injuries were reported.
It is protocol for the San Miguel Fire District to call in the Sheriff’s Bomb/Arson Unit, when dollars losses could be high or if the fire results in the possibility of serious injury or death. Additional information for the search of possible victims, cause and dollar loss will be released by the Sheriff’s Department.
In total, a team of about 35 people responded including Firefighters from La Mesa, Lemon Grove and Cal Fire.