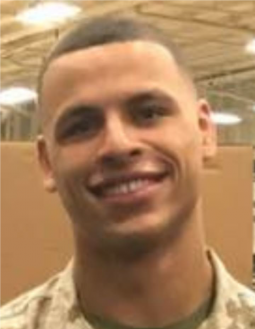 September 9, 2018 (Lemon Grove) – Christopher Truax Jr., a 21-year-old Marine Corps Sergeant, has been identified as the victim fatally shot early Friday in Lemon Grove.  The Sheriff has asked for public help to solve the crime.

Truax was stationed at the Marine Corps Air Station at Miramar and is from Horseheads, New York, says Lt. Rich Williams with the Sheriff’s homicide unit.

Shortly after midnight Friday, Sheriff’s deputies saw a man and woman in a vehicle parked in the middle of the street in the 7400 block of Pacific Avenue, Lemon Grove. Upon investigation they found Truax bleeding and a witness told them he had been shot.

Deputies called for the Lemon Grove Fire Department to assist and provided first aid, but the seriously injured victim stopped breathing. Deputies performed CPR until relieved by fire department personnel, but despite these lifesaving efforts, Truax was pronounced dead at 12:39 a.m.